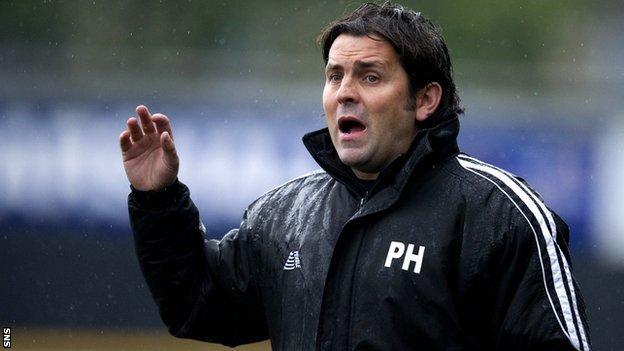 "I think we've got the right man in Craig," said the Alloa boss, who played under Levein during his days at Hearts.

"We can't chop and change managers every couple of years, we've got to give them more time to, hopefully, get the positive results.

"He'll see it as a building job here. We know we're not in a good position, you know that as a manager."

Following a poor sequence of results, Levein's future will be discussed by the Scottish Football Association board later this week.

And, now in his second season as a manager, Hartley can sympathise with the pressure Levein is under as Scotland sit bottom of World Cup qualifying group A.

"I think being the Scotland manager is always a high-pressure job," said Hartley, who won 25 caps for Scotland.

"When you don't win games then, with the media attention, you come under a lot of pressure and I think Craig knows that.

"But he's strong enough, he's got a strong mentality."

Scotland have accumulated just two points from their opening four World Cup qualifying matches and the former Celtic, Hearts, Hibs and St Johnstone midfielder acknowledges that results have not been good enough.

"We've got a good group of players and we've not got the right results, so I think there's got to be blame there too.

"Players have to take some responsibility, it can't always be the manager's fault.

"I think as a team you have take responsibility for the results.

"The pressure stops at the manager but I think we've got to look at other avenues.

"I think as a manager you make mistakes all the time, there's no doubt about that and I think Craig knows the position he's in."