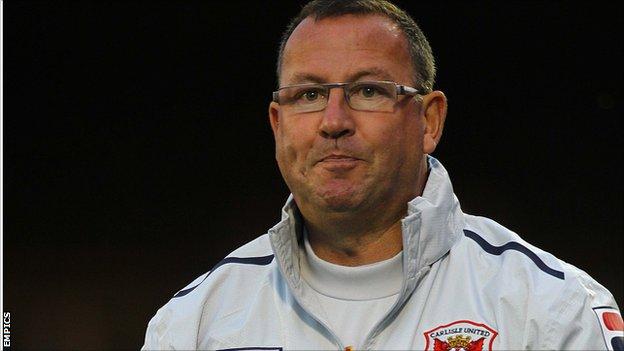 Carlisle United manager Greg Abbott has described Saturday's FA Cup first round tie with Ebbsfleet as the most important fixture of the season so far.

United have won just one of the last five games, conceding 12 goals in the process to slip to 14th in League One.

"It's the biggest game of the season. We need to get a result and a decent draw," Abbott told BBC Radio Cumbria.

"It can give us confidence and form, belief, and also the critical situation is the finance."

Abbott added: "It might just get us those two loan players - a cup run - to buy us that bit of time."

United slump in form has come with several key players injured, such as midfielders Jon-Paul McGovern and Paul Thirlwell, in addition to long-term absentees Lee Miller and Rory Loy.

"There's been a glut of injuries at key times," Abbott added.

"I'm looking at where we go with the players we've got left and it's a really tough situation. At the minute the physio Neil Dalton is working double time to get the players out.

"We've got nowhere to go with injuries to key players. We've got a lot of young inexperienced players, but at times like this I need real men, real warriors, and at the moment they've spent more time with Neil than they have done with me."