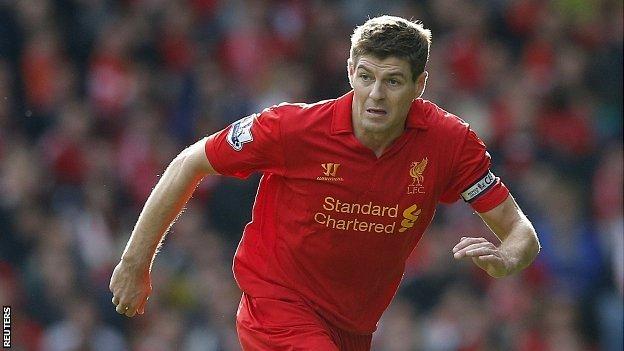 Speaking immediately after Sunday's 2-2 Merseyside derby draw, Gerrard likened Everton's style of play to that of Stoke, but he has now moved to clarify his views.

"I've watched the game again, and I've seen some of Everton's matches this season," he told the Liverpool Echo.

"What I said in relation to their style of play went too far."

"I was frustrated by the disallowed goal from Luis when I spoke and also some of the things that have been said about Luis in recent weeks which haven't been fair in my opinion," he told the paper.

"As captain I have a duty to stand up for our players when I feel they are unfairly singled out.

"But it wasn't my intention to disrespect Everton or Stoke for that matter and I certainly didn't intend any disrespect to their manager or players.

"I have the utmost respect for [Everton manager] David Moyes and [Stoke boss] Tony Pulis and the job they have done at their respective clubs.

"My main issue was with the goal that wasn't given and that Liverpool did not get the three points I felt we deserved in what was a fantastic derby match."

Gerrard's initial claims were not reflected in the match statistics, which showed that Everton enjoyed greater possession, made more passes and completed proportionally fewer long passes than Liverpool.

The comments were also laughed off by Everton defender Phil Jagielka.

"It does make you chuckle, but Stevie is saying things like that then there must be a reason behind it which must be that we are doing something well," said Jagielka.

"If Stevie says we play long ball then I'm not going to deny it. Do we play them for the full 90 minutes? No. But we play quite direct.

"We don't believe in passing it around for half an hour for the sake of it. We won't change the way we play."