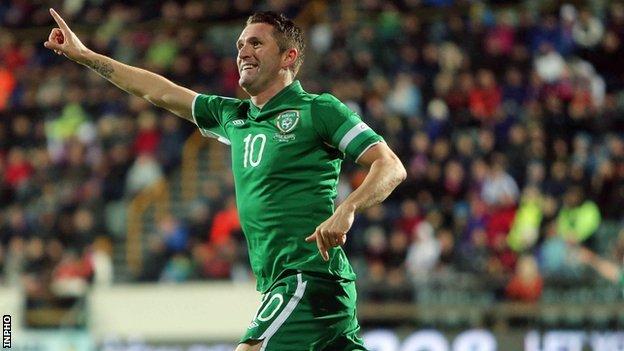 Republic of Ireland captain Robbie Keane is not included in the 26-man squad for the 14 November friendly against Greece in Dublin.

Record goalscorer Keane will remain with his LA Galaxy club as Ireland manager Giovanni Trapattoni takes an opportunity to assess other players.

There are also 12 players who have made less than 10 appearances, including uncapped Everton defender Shane Duffy.

Norwich midfielder Wes Hoolahan is in line to win only his second cap.

Trapattoni indicated the in-form Houlahan would play at least half of the match against Greece.

The 30-year-old was initially included in the Republic squad for the August friendly in Serbia but was unable to accept the recall due to injury.

Fulham defender Stephen Kelly is also included despite reports of a bust-up between him and assistant coach Marco Tardelli between the October matches against Germany and the Faroe Islands.

Aston Villa defender Ciaran Clark is included despite being out of action for almost a month with a knee problem.

Stoke left-back Marc Wilson is missing after breaking his leg in his club's draw with Sunderland last weekend.

Trapattoni, under pressure after a poor Euro 2012 and a 6-1 hammering by Germany in World Cup qualifying, intends to trim the squad to 23 before the match but is waiting for injury reports.

"As we have a break from competitive games for a few months, I am using this fixture as an opportunity to try out new players and view their potential," Trapattoni said.

"Greece are currently 10th in Fifa's world rankings, and will provide difficult opposition for us.