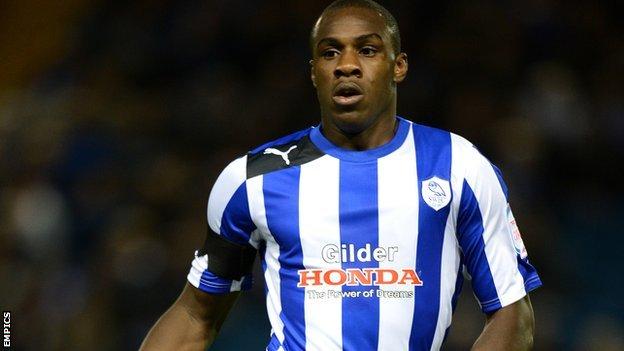 Sheffield Wednesday winger Michail Antonio has thanked the club's supporters for sticking with the team during their bad run of results.

"The win on Saturday was down to the supporters because they kept showing their faith in us, we didn't stop believing in ourselves," he told BBC Radio Sheffield.

He could go on to play for England, he's got the ability to be playing in the Premier League right now

"It's unbelievable how the fans have stuck by us through all the defeats."

The 22-year-old added: "It was definitely a relief. We've been on such a bad run but on Saturday everything just really went out way.

"We needed that win and now we have to look to kick on against Peterborough."

The Owls host their fellow strugglers on Saturday knowing that a win would move them back out of the bottom three.

Everton loanee Ross Barkley, 18, scored twice for Wednesday in the win at Portman Road and Antonio is confident the highly-rated youngster continue his impressive form.

"He is a quality player and I think he can repeat the performance he put in on Saturday every week," he continued.

"He could go on to play for England, he's got the ability to be playing in the Premier League right now."