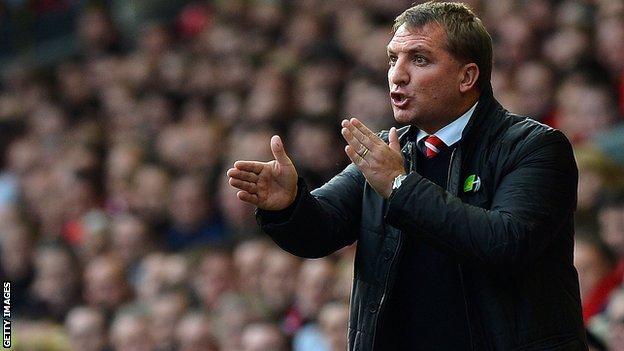 Gerard Houllier is confident that Brendan Rodgers is the right manager to bring success back to Liverpool.

But the former Reds boss has urged the club to be patient with Rodgers as he rebuilds his squad and implements his own ideas at Anfield.

"You need to give him time," Houllier told BBC Radio Merseyside. "He's starting a new cycle with the team.

"It will take a minimum of two years, maybe three, to achieve success. If the owners are patient, it will come good."

Liverpool are 12th in the Premier League, having taken 10 points from their first nine matches, while qualification for the knockout stages of the Europa League is far from guaranteed, despite the Reds lying top of their group.

And the Reds lost their chance to defend the League Cup after to Rodgers' old club Swansea on Wednesday.

But the former Watford and Reading boss has drawn praise for the way he has adapted to life as manager of one of the biggest clubs in Europe, his attempts to get Liverpool playing attractive passing football, and his willingness to put faith in youngsters such as Raheem Sterling, Jonjo Shelvey, Andre Wisdom and Suso.

Houllier has described the 39-year-old from Northern Ireland as a "brave" manager and believes that quality will endear him to Liverpool supporters.

"I think he will [get time] because now the fans know that he wants to play a certain style that suits the team very well," added the Frenchman, who was manager of Liverpool between 1998 and 2004.

"He's also giving a chance to young players. There were three or four players below the age of 20 in a big derby. When experience comes along, they will get better and better.

"He doesn't look as if he lacks courage. Brendan is brave and he took some important decisions before the [which ended in a 2-2 draw]."

While the emergence of young players like teenage winger Sterling have made headlines this season, Houllier says Liverpool's talisman remains captain Steven Gerrard, a stalwart of the 65-year-old's successful six-year tenure at Anfield.

"The influence that Steven had in the Everton game was just as good as some important games he has played in the past," he added.

"In big games, you have big players.

"He and Michael Owen played in the first team before the age of 20. It was the same with Robbie Fowler, although he was a little bit earlier.

"They all belonged to that generation of players that won a lot of things with Liverpool at the time."

You can hear the full interview with Gerard Houllier on BBC Radio Merseyside from 19:00 GMT on Thursday, 1 November