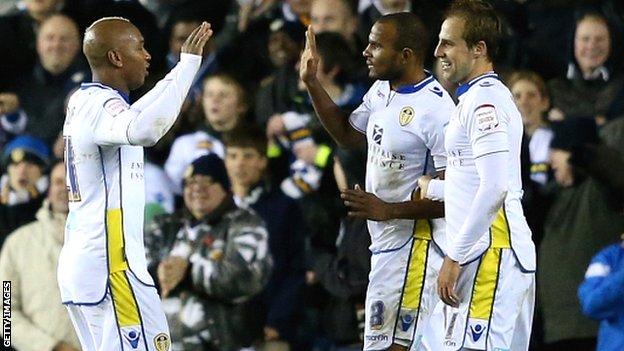 Championship side Leeds have been drawn at home against Chelsea in the quarter-finals of the Capital One Cup.

Chelsea's involvement in the Club World Cup means the match will take place on 19 December while the other ties will be in the week beginning 10 December.

League Two Bradford, who beat Wigan on penalties on Tuesday, were rewarded with a home tie against Arsenal.

Following his team's 5-4 victory in extra-time against Manchester United, Chelsea boss Roberto Di Matteo said: "Leeds and Chelsea have a bit of history so it should be an interesting game.

"I thought it was a very exciting game. We played well and had a lot of chances. We could have finished off the game sooner than we did. The boys showed they have fantastic character."

The Yorkshire club, who last played in the quarter-finals of the League Cup in January 1996, played their last match in the top flight against Chelsea in 2004.

Phil Parkinson's Bradford, currently fifth in the fourth tier of English football, were relegated from the Premier League in 2001 and have not played in the last eight of the League Cup since January 1989.

Swansea reached the quarter-finals of the competition for the first time after beating holders Liverpool 3-1 at Anfield and will now face Championship side Middlesbrough, who shocked Sunderland at the Stadium of Light on Tuesday.

Villa boss Lambert, who left Norwich in the summer, has presided over only one victory in the Premier League this term, but his team beat Manchester City 4-2 at the Etihad Stadium in round three and reached the last eight with a 3-2 win at Swindon on Tuesday.

Norwich visited Villa Park in the Premier League last weekend, the match finishing in a 1-1 draw.

Lambert's successor at Carrow Road, Chris Hughton, overcame one of his former clubs Tottenham as Norwich progressed to the quarter-finals of the competition for the first time in 18 years, coming from a goal down to secure a 2-1 victory.