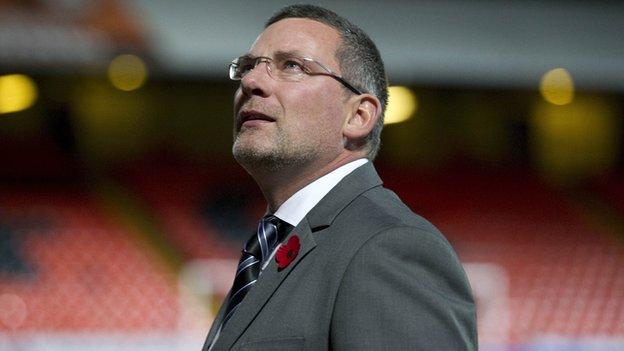 The uncertainty over Craig Levein's future as Scotland coach will continue over the weekend.

Discussions have been ongoing for days about his position.

But the BBC understands that the Scottish Football Association board now wants more information before making a final decision.

It has been conducting a campaign review over the past few days but cannot agree if his time is up and now want to deliberate over the weekend.

A decision is now expected on Monday - the day before Levein is due to name his squad for the upcoming friendly against Luxembourg.

His future is being discussed after a run of poor results left the national side bottom of their World Cup qualifying group.

Speaking to BBC Scotland on Wednesday, Levein said: "The squad for the Luxembourg game will be named on Tuesday and there will be an announcement before then.

"I'm hugely proud to be Scotland manager and want to continue doing the job."

Levein says that, despite those results, he wants to continue in the role and has already spoken this week to the SFA's chief executive and president.

"I had a chat with Stewart Regan and Campbell Ogilvie and I'll find out one way or the other early next week," the coach told BBC Scotland's Sportscene programme.

Levein was speaking while acting as a pundit during live coverage of the Scottish Communities League Cup quarter-final between two of his former clubs, Dundee United and Hearts.