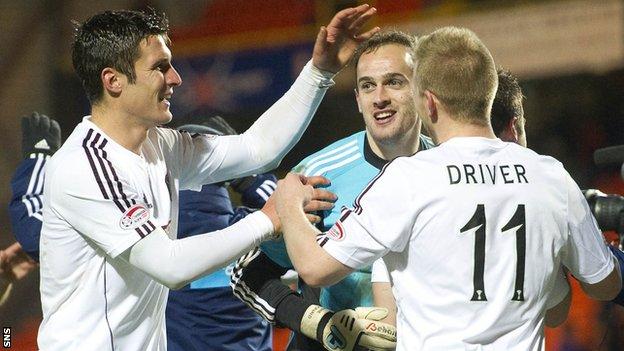 John McGlynn views reaching the semi-finals of the Scottish Communities League Cup as a timely boost for financially-stretched Hearts.

The manager and his players have had to endure the late payment of wages ahead of their victory over Dundee United in a penalty shoot-out at Tannadice.

"The lads won the Scottish Cup in May, so we've got the opportunity to get into another cup final," he said.

"It is great from that point of view and financially it is a big thing too."

McGlynn's side took the lead through Callum Paterson but had Darren Barr sent off after Johnny Russell's equaliser.

"United hit the post in extra time, but I thought we had a great shape about us and we denied them many opportunities," Hearts' manager told BBC Scotland.

"And I thought we were quite dangerous on the counter-attack.

"I was delighted with the work ethic and organisation of the team. It was first class.

"Both teams put an awful lot into it and it was a great entertaining game.

"It is fantastic. We are in the semi-final. That's a big thing."

McGlynn admitted that he had sympathy for opposite number Peter Houston and his backroom staff of Gary Kirk and Paul Hegarty.

"Obviously I know Peter, Gary and Paul very well, so it is not a nice way to lose," he said of the penalty shoot-out, which went 5-4 in Hearts' favour when Sean Dillon became the third United player to miss from the spot.

"We've missed our first two and you think it's all over and, all of a sudden, it all turns.

"It is a lottery. We practiced them yesterday, but you can't construct the situation you have there shooting into the Dundee United fans."