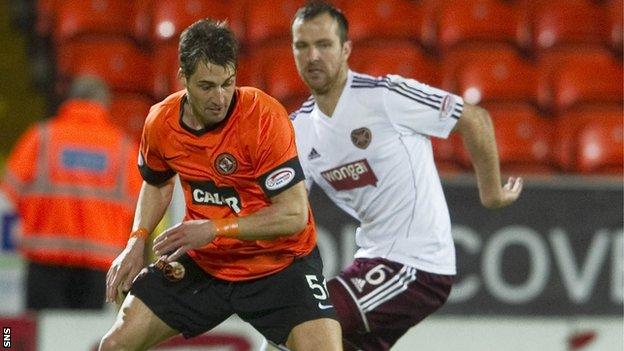 The Czech midfielder left Hearts after winning the Scottish Cup in May and trained with the Tynecastle club before joining United last week.

"He wasn't upset," said manager Houston. "We spoke about it before.

"He knew about it. I wasn't going to let him take a penalty. I don't think it would've been fair on him."

Hearts had already been reduced to 10 men by the sending-off of Darren Barr and United had to de-select a player, meaning Skacel was a frustrated observer as Sean Dillon's miss handed the visitors a place in the semi-finals after it finished 1-1 after extra-time.

Skacel, who had come on as a second-half substitute to the cheers of the Hearts fans, had to be coaxed from the field.

But Houston insisted the Czech was never going to take a penalty.

"I took Rudi out of it," said Houston. "I thought it would be best with the guys who I know taking penalties and trust.

"I trust the players who were left on the park. I felt there would be less pressure on the players that have been here for a while."

Callum Paterson put the visitors in front after 20 minutes and hit a post in the second half after Johnny Russell's 35th-minute equaliser.

Hearts midfielder Barr was sent off for a second bookable offence after 78 minutes.

However, although United went closest to an extra-time winner when John Rankin hit the post in the 119th minute, Houston was disappointed with his team's overall display.

"I won't criticise the players who have missed," said the United manager. "They were brave enough to step up.

"I don't think we did enough to win the game.

"At 1-1, I was doing cartwheels because I thought, in the first half, Hearts dominated."