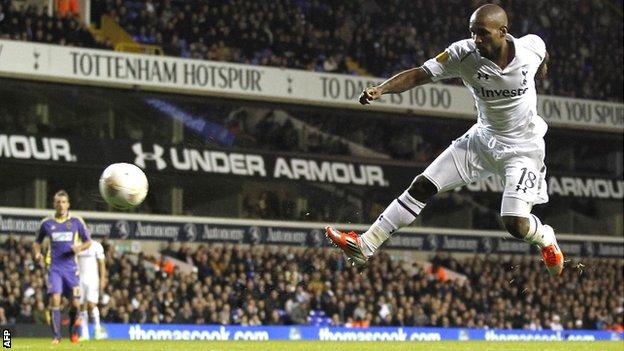 Jermain Defoe scored a brilliant hat-trick as Tottenham returned to form with a victory over NK Maribor that ignites their Europa League campaign.

Spurs drew their opening three Group J matches but Defoe put them ahead with a fine volley from Gareth Bale's cross.

A poor piece of defending from Kyle Naughton and Hugo Lloris allowed Robert Beric to level just before half-time.

But Defoe drilled home to restore his side's advantage and slipped home another Bale centre to seal the win.

It was a convincing result that moves Andre Villas-Boas's side up to second in the table - two points behind leaders Lazio, who beat Panathinaikos 3-0, and two above third-place Maribor.

Defoe's hat-trick took him to 126 goals for Tottenham, moving him above Teddy Sheringham to eighth on the club's all-time list. Martin Chivers (22) is now the only man to have scored more for Spurs in Europe than Defoe (15)

They travel to Lazio on 22 November before hosting Panathinaikos on 6 December, needing four points to guarantee a place in the last 32.

Aware that defeat would deal another significant blow to their European hopes, Villas-Boas abandoned the 4-5-1 formation he has used all season and instead opted for an attack-minded 4-4-2.

Emmanuel Adebayor earned his first start of the campaign and partnered Defoe up front as Spurs went in search of goals.

It was a decision that paid off as the hosts poured forward early on - Adebayor, Defoe and in particular Bale instrumental in stretching Maribor and picking holes in their defence.

Bale saw a header cleared from in front of the line before seeing a cross elude his team-mates after an incredible piece of control.

Defoe then headed Adebayor's centre straight at Maribor goalkeeper Jasmin Handanovic, but would not be denied a minute later.

Visiting right-back Martin Mejac was affording Bale far too much time and space, and punishment arrived when the Welshman crossed for an unmarked Defoe to angle a fine volley across Handanovic.

"Amazing day at White Hart Lane tonight. Thank you guys for everything - Spurs fans tonight were awesome. Thank you."

It was the least Tottenham deserved for their positive approach, but to Maribor's great credit they defended stoutly to avoid going further behind and then set about showing their own ambition.

A rare foray forward saw Goran Cvijanovic head over after Lloris had parried a Tavares shot, and within seconds the scores were level.

Lloris passed to Naughton on the left but the 23-year-old played it straight back and put his goalkeeper under pressure.

Instead of opting for a first-time clearance the Frenchman attempted to evade Beric but was tackled and the ball trickled over the line.

The mood of the home fans was lifted when Fabrice Muamba - back at White Hart Lane for the first time since - was introduced at half-time.

"I want to thank all of you Spurs fans who were here and who prayed for me," said the former Bolton midfielder.

"You were all fantastic and I will never forget."

Such positive vibes seemed to lift Spurs after the break and they needed just three minutes to regain the lead, 20-year-old Tom Carroll releasing Defoe to plant a left-foot finish into the bottom corner.

Beric almost equalised again when he nodded Agim Ibraimi's free-kick just over the bar, but Tottenham were swiftly back on the front foot, utilising their speed and width at every opportunity.

A sumptuous scooped pass by Bale was volleyed wide by Adebayor, who was thwarted by Handanovic after being found by Kyle Walker.

There was no mistake from Defoe, though, and he rounded off a free-flowing move involving Adebayor, Tom Huddlestone and Bale to register his eighth goal of the season and fifth treble for Spurs.