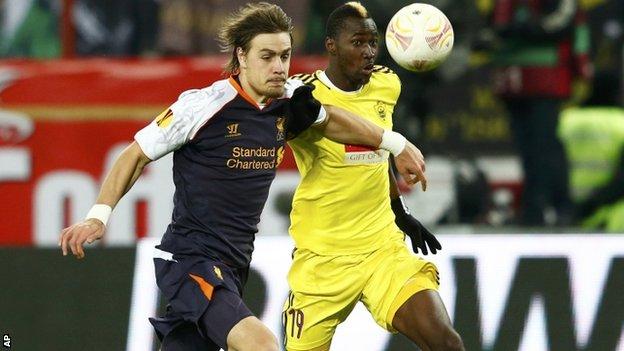 Liverpool's hopes of qualifying for the knockout stages of the Europa League hang in the balance after losing to Guus Hiddink's Anzhi Makhachkala.

A goal from Anzhi's 6ft 8in Lacina Traore right on half-time was enough to send Brendan Rodgers' young and largely inexperienced side to defeat in Moscow.

The Ivorian striker produced a moment of magic to loop the ball over Brad Jones and decide the Group A match.

Jordan Henderson spurned the best of Liverpool's chances but Anzhi held on.

On the face of it, this was another disappointing defeat for Liverpool, who slip off the top of the group.

New leaders Anzhi are one point clear with two rounds of matches remaining, while Swiss side Young Boys have moved alongside the second-placed Reds on six points following their 3-2 win at Udinese.

But, although the ongoing problem of a chronic failure to turn possession into points remained, there were signs of encouragement with many of Rodgers' young players largely holding their own in a difficult environment.

It was a bracing night in Moscow, one that called for the presence of men and not boys. It said much of Liverpool's current predicament that Jonjo Shelvey was one of the most experienced players in Rodgers' line-up but throughout he led from the front, dictating play and setting the tempo with an assurance that belied his 21 years.

This competition has been something of a testing ground for Liverpool's youngsters, with Raheem Sterling, Andre Wisdom and Suso announcing their respective arrivals with a series of impressive performances. Youth was to the fore again with 19-year-old Conor Coady handed his debut alongside 18-year-old striker Adam Morgan.

Joe Cole, celebrating his 31st birthday, had little impact as the youngsters drove Liverpool on. The best of the chances fell to Henderson after 23 minutes following a clever spin and perfectly timed through ball from Morgan.

The England midfielder found himself with only goalkeeper Georgi Gabulov to beat but, rather than shoot, Henderson hesitated and tried to slide the ball inside for Cole only for Joao Carlos to intercept.

The Russians had shown a glimpse of their ability after 35 minutes when Liverpool goalkeeper Brad Jones was forced to turn Samuel Eto's fierce shot over the bar, after former Chelsea winger Yuri Zhirkov had robbed Wisdom near the halfway line.

On both sides, the football was muscular and committed but devoid of the finesse to create the breakthrough. Individualism appeared the most likely source of joy and so it proved.

Traore shattered the mediocrity with the first half's single moment of brilliance, hooking the ball over Sebastien Coates's head with his right foot before lifting a bouncing ball high past Jones with his left to snatch the lead with the last kick before the interval.

Morgan fired into the side netting after the break, but Anzhi began the second half with more pace and purpose than they had displayed at almost any time in the first.

The Anzhi left-back was at the heart of the action again with 15 minutes remaining as Troare headed his pin-point cross at goal, only for Jones to produce yet another impressive save.

Liverpool kept pushing, however. Suso, on as a substitute, tested Gabulov with a dipping shot but Cole was unable to convert the rebound.

Traore should have killed the match on 78 minutes when he raced onto Jucilei's delightful through-ball only to pull his shot a foot wide of Jones's left-hand post with only the Liverpool goalkeeper to beat. The Premier League club pushed for an equaliser, but Anzhi stood firm.