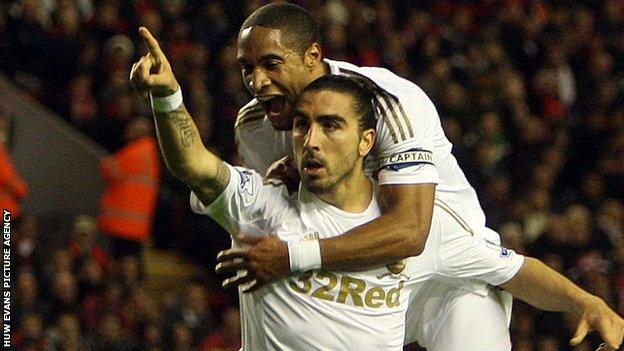 Swansea secured a place in the last eight of the League Cup for the first time after beating Liverpool.

The Swans face Middlesbrough in the next round but the Cup run is not a distraction says Williams.

"It breeds confidence and winning's a habit so the more games you can win, the better," Williams said.

"We performed well on Saturday [at Manchester City] and came here and played well.

"It's one that we all enjoyed and without going over the top we worked hard.

"It was great team performance and we're worthy to celebrate a little bit in the dressing room.

"For me personally it's one of the best games I've enjoyed."

Their reward is a home quarter-final tie in December against the Championship's current third-placed side Middlesbrough, who won 1-0 at Sunderland in the fourth round.

With a number of big clubs including Manchester United out of the League Cup, Williams says the Swans can advance further in the competition.

"I'm not going to say we can win the competition but it's nice we're taking it seriously, playing strong sides and progressing," added Williams.

"We've got to look to progress now through the quarter-finals. I've never got this far in a cup before so I'm enjoying it.

"It's going to be a tough game I think. They're [Middlesbrough] doing really well in the Championship."