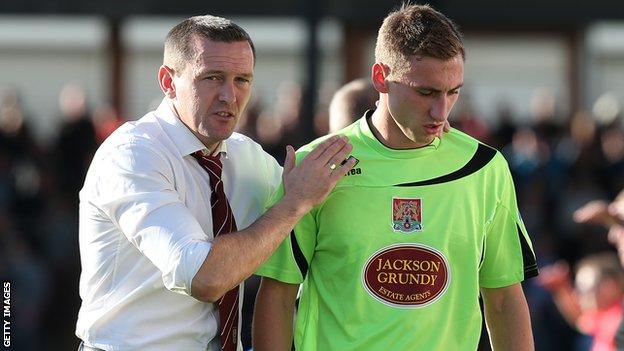 Northampton Town striker Louis Moult says he does not see himself as a direct replacement for Alex Nicholls.

The 20-year-old has scored two goals in his last two starts since Nicholls broke his leg.

He told BBC Radio Northampton: "I'm absolutely buzzing. I'm happy to be playing and to get the goals is good for my confidence.

"I wouldn't say I'm filling his boots because he's done fantastically scoring the goals he has."

Moult continued: "All the lads have been to see Alex. His character is unbelievable. He was upbeat and we're just hoping for a speedy recovery now."

Having been given the chance to impress from the bench - and scoring - against Port Vale, the former Stoke City player says he is enjoying his partnership with Adebayo Akinfenwa.

"Me and Bayo understand each other," said Moult. "When I've got the ball, he's already expecting it off me round the corner and vice-versa."

Meanwhile, manager Aidy Boothroyd says he is pleased with Moult's impact in the first team.

"He hits the target more often than not and does things that people don't expect," Boothroyd said. "He'll get fitter and the more league football he plays, the brighter he'll be.

"I'm pleased with him. Now he's got to make it three goals in three games if selected against York City."