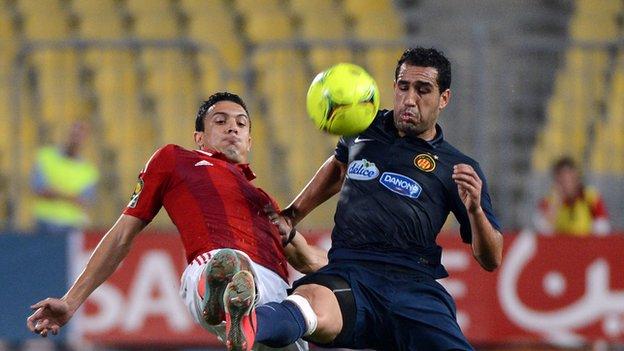 Esperance scored a crucial away goal in the first leg of the Champions League final as they drew 1-1 with Al Ahly.

It looked as though they were going to steal victory after Walid Hichri's header had put them in front and goalkeeper Moez Ben Chrifia performed magnificently to keep them ahead.

But Ahly finally made the breakthrough on 89 minutes when El Sayed Hamdy rifled in a low shot from 15 yards.

About 20,000 fans were in attendance at the Borg El Arab stadium in Alexandria.

It was only the second time supporters have been allowed to watch a match in Egypt since the Port Said tragedy that claimed more than 70 lives following violent clashes at match between Ahly and Al Masry.

While the fanatical section of Ahly's fans, known as Ultras, had threatened to boycott the match, there were plenty of supporters at the game - some wearing black t-shirts to show respect for the victims of February's tragedy.

A minute's silence was observed before the match, which began with Ahly in confident mood and quickly assuming control of the tempo and territory. 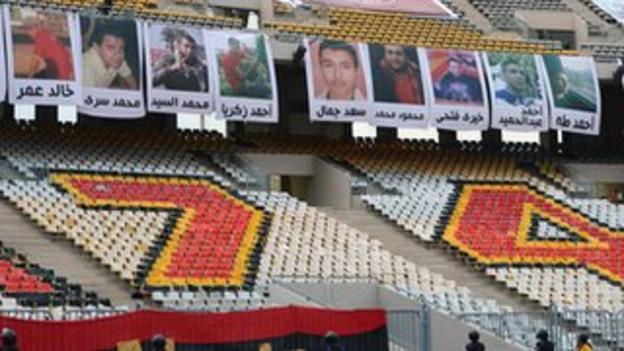 Visiting keeper Chrifia needed to be alert to deny Gedo and then Abdullah Saeed, who tested the stopper with a rasping effort.

Mohamed Aboutrika smashed the ball high over the bar when unmarked in the penalty area as Esperance were let off the hook again.

And for all their superiority in the first half, Ahly were unable to break through Esperance's defences - and when they did get a sight of goal, Chrifia was there to snuff our the danger.

Everything changed after the break as Esperance forced a corner in a rare attack and struck a hammer blow when Hichri rose highest at the bear post to despatch his header past bemused keeper Sheriff Ekramy.

It was a goal that came hugely against the run of play and cemented the pattern of play for the remainder of the game as Esperance sat deep, happy to defend their lead and the crucial away goal.

But the visitors needed two fine saves in the space of a couple of minutes to keep them ahead; first Chrifia got down low to his near post to push away Saeed's effort and then the 21-year-old was equal to a fierce long-range drive from Gedo.

Ahly were almost undone, however, when Esperance won a corner and Yannick N'djeng was inches away form heading his side into a 2-0 lead.

After that escape, the Egyptians redoubled their efforts in search of an equaliser.

They looked certain to get it when Walid Soliman's low cross sat up perfectly for Mohamed Aboutrika and the midfielder stabbed the ball goalwards from point blank range but, somehow, Chrifia was able to beat the ball out.

Just as time seemed to be running out for Ahly, they finally restored parity on the night when the ball ran through to substitute Hamdy in the penalty area and he lashed the ball beyond Chrifia.

Ahly pushed for a winner in injury time but it wasn't to be and the second leg - to be played in Tunisia on 17 November - is finely balanced, although Esperance may be considered to have a slight edge given their away goal.