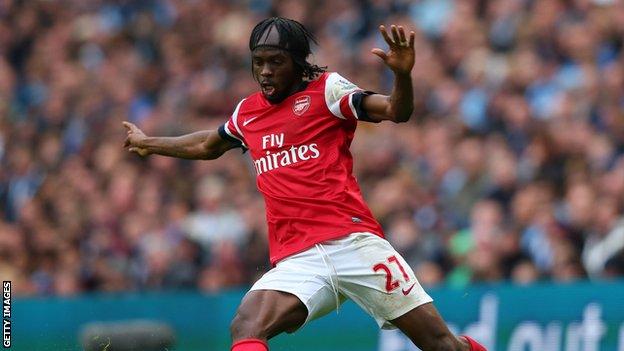 Arsenal forward Gervinho is expected to be out for three weeks with an ankle injury.

The 25-year-old was carried off on a stretcher after falling awkwardly during Saturday's 1-0 Premier League win over Queen's Park Rangers.

Manager Arsene Wenger said: "Gervinho is out, we think [for] three weeks."

Gervinho, who was scored five goals in 11 games in all competitions this season, will miss Saturday's trip to Manchester United.

He is also set to sit out the Champions League game at Shalke 04, Ivory Coast's friendly against Austria and the Premier League matches against Fulham and Tottenham.

"Basically the squad should be approximately the squad we had last week," Wenger said of this weekend's match at Old Trafford.

"We have no comebacks, no Wojciech [Szczesny], no [Kieran] Gibbs, no [Abou] Diaby."