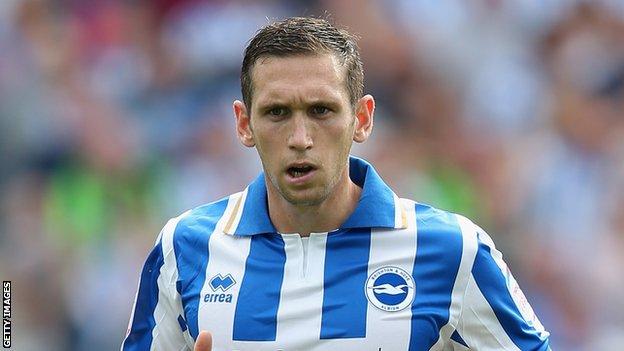 Brighton midfielder Andrew Crofts says he will improve now he has fully recovered from a hamstring injury.

The 28-year-old was out for seven weeks but has played in the last three games.

He told BBC Sussex: "I've been lucky with injuries in my career and it was a hard time. I've never experienced it before and a tough time.

"I was playing with a slight injury which was holding me back a bit. Now I'm back in my stride I can show everyone what I'm made of."

The Wales international added: "My match fitness is coming back to me.

"The more game-time I get I'll get stronger and stronger."

The Seagulls currently sit 10th in the Championship table after a run of six games without a win.

Albion manager Gus Poyet believes Crofts, who re-joined the Seagulls this summer after two seasons at Norwich, will help the team to turn around their form.

"It was a situation which happened to Craig Mackail-Smith as well," Poyet said.

"Crofty was really getting into the system and the understanding of what we needed from him and we were winning games.

"Macca was scoring, got injured, and when they got back they found a different team with different issues.

"They need to do their own work but also the team needs to start performing better [to get] their qualities.

"It's a matter of clicking again and being important [for the team]."