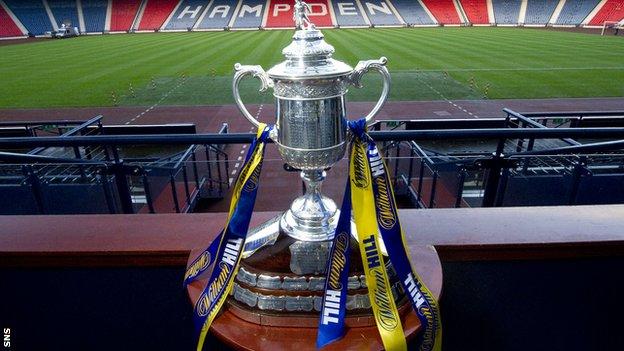 Manager Max Christie believes Bonnyrigg Rose can cause a Scottish Cup shock when they visit Brechin on Saturday.

The East of Scotland juniors have beaten Girvan and Stirling University to set up a third round clash with the Second Division outfit.

"Of course we can win it," Christie told BBC Scotland.

"The majority of our players have all played professional football so hopefully we won't be overawed by the occasion at Glebe Park."

The Rose as they are known locally have a history that goes back over 100 years and during that period some notable names have worn the red and white hooped shirt.

"Sir Sean Connery is probably the most famous person to play for the club," explains Christie.

"He used to deliver my auntie's milk before playing!

"Pat Stanton and John 'The Ghost' White were other famous names to play for Bonnyrigg.

"White played for the famous Spurs team in the early 1960s managed by Bill Nicholson."

Bonnyrigg Rose are current holders of the East of Scotland Super League and Christie is happy to see fans coming out in large numbers to watch junior football.

"We will take around 600 fans to Brechin on Saturday," he predicts.

"Last season Auchinleck took the largest away support to Tynecastle outside of the Old Firm and Hibs."

Christie's father is the former Meadowbank Thistle and Stenhousemuir manager Terry, who was noted for wearing his duffle coat whenever he took his place in the dugout.

And Christie junior, who played for Meadowbank, Dundee, Stenhousemuir and Alloa, revealed that the coat was originally his.

"It was a present from his ex-wife to me for my 21st birthday but I got too much stick for wearing it so I passed on to faither," he laughs.