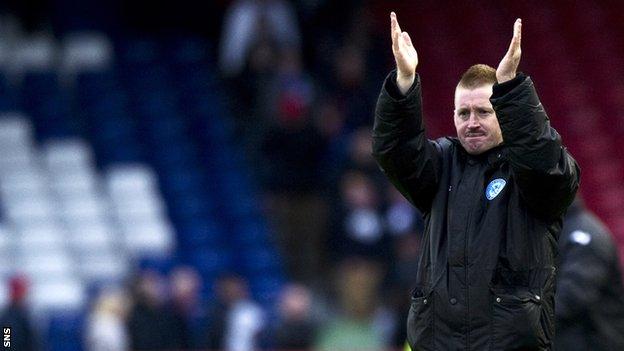 St Johnstone manager Steve Lomas has been given a two-game touchline ban, suspended until the end of the season.

The punishment follows comments Lomas made about Grant Munro after his side's 2-1 win against Ross County.

The Northern Irishman was unhappy with the County defender's role in striker Rowan Vine's dismissal.

"It was a push from Munro first, and Viney just turns round, the actual reaction from the player is a disgrace if I'm being honest," he said.

Lomas was critical of Munro after his 10-man side ended County's 40-match unbeaten league run.

"For the big man to fall down like that; you'd expect that off a wee forward, but not from a big strong centre-half. Pretty poor, pretty poor."

Lomas was found to have breached the SFA's disciplinary rule 71 by accusing the Staggies skipper.

Rule 71 states: "A recognised football body, club, official, team official, other member of team staff, player or other person under the jurisdiction of the Scottish FA shall, at all times, act in the best interests of association football. Furthermore such person or body shall not act in any manner which is improper or use any one, or a combination of, violent conduct, serious foul play, threatening, abusive or indecent or insulting words or behaviour."