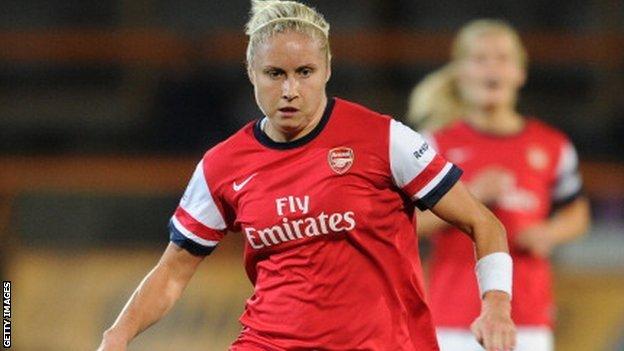 Arsenal remain in contention to reach the Champions League quarter-finals after overcoming German champions FFC Turbine Potsdam in the first leg of their last 16 tie.

Arsenal skipper Katie Chapman and substitute Ellen White both scored in the second half.

Yuki Ogimi replied with a late away goal to keep the Germans in the tie.

Arsenal travel to Potsdam next Wednesday for the away leg, and coach Laura Harvey is hopeful her English champions can complete the job.

"The performance for 90 minutes was excellent," she said. "It puts us in a great position. The bottom line is if we don't lose we're through, and one away goal and it makes it hard for them.

"We've shown today that we should go out there with a positive attitude. I don't think we should sit back and defend. We should really go for it."

This was the first time two former European champions had met in the last 16 of the competition.

This season's Women's Uefa Champions League final will be held at Stamford Bridge on 23 May, 2013. The defending champions are Lyon.

Harvey's unbeaten FA Women's Super League champions came into the match without having played a competitive game since 10 October when they lifted the Continental Cup after victory over Birmingham City.

The Arsenal boss hoped, however, that a 10-day break followed by 10 days of concentrated training had prepared her side for the encounter.

But two-time European champions Potsdam, currently second in the Frauen Bundesliga, arrived at Meadow Park on the back of a 3-0 win over USV Jena on Sunday.

And their match fitness showed in the opening minutes as the visitors, who included Japan star Ogimi and former Glasgow City striker Lisa Evans, were sharper on the ball than Harvey's team.

Ten minutes in, however, Potsdam were on the back foot as leading scorer Natasa Andonova was stretchered off the pitch with an ankle injury.

The short beak in play seemed to settle the Gunners and moments later Alex Scott enjoyed the first real chance of the game, but the defender's swerving volley flew just over the crossbar.

The German champions certainly looked rattled and Bernd Schroeder, who is in his fourth decade as Potsdam manager, urged his team on from the sidelines.

They were unlucky not to capitalise when Arsenal keeper Emma Byrne made a hash of a back-pass but Patricia Hanebeck scuffed her chance to score.

The midfielder made amends when she slipped a fine pass into the path of Ogimi minutes later, only for the Olympic silver medallist to be dispossessed by Gilly Flaherty in the box.

A scrappy start to the second half almost brought a breakthrough for the visitors when Evans set up Antonia Goransson but she was unable to find space to shoot in the goalmouth melee that followed.

Arsenal were quick on the counter and began to dominate as the hour approached. Leading scorer Little latched on to an incisive pass from the excellent Gemma Davison, but the Scot could not quite get round the keeper to shoot.

Nobbs had the fans, who numbered more than 800, groaning minutes later when she flashed a shot just beyond the post after more fine work by Davison. But on 70 minutes, captain Chapman finally had the ball in the back of the net when she flicked a Yankey corner beyond Naeher to give the hosts the lead.

Substitute Jennifer Beattie, on for Smith, headed just over the crossbar as Arsenal kept up the pressure on the opposition goalmouth.

At the other end, Scott cleared a goal-bound shot off the line, with Little almost immediately denied by Potsdam's keeper as the Gunners broke upfield.

But just minutes after White had replaced Davison, Little set the England striker up on the edge of the box and the substitute slotted home confidently.

Potsdam were not finished and Ogimi produced a touch of class when she chested a cross down and volleyed beyond Byrne to make it 2-1.