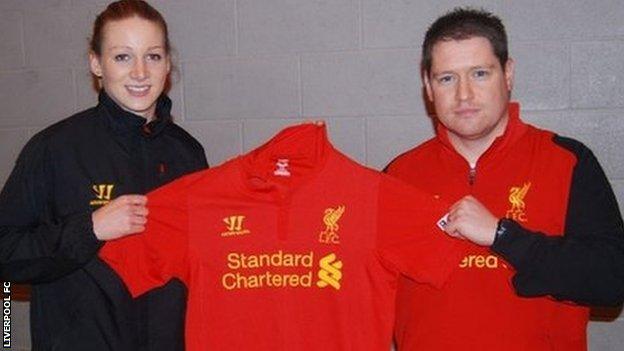 The 21-year-old spent the last two seasons with Chelsea and helped the club to the 2012 FA Women's Cup final.

Bonner has played for England at Under-17, Under-19 and Under-23 levels and was in the senior squad for the Euro 2013 qualifier in Croatia in March.

"I am delighted to be joining Liverpool at a key time in my football career," said Bonner.

"I have been greatly influenced by the commitment that Liverpool are showing towards women's football.

"When the opportunity to work with Matt again came I was pleased to take it and I am excited for the challenge ahead."

The defender is Liverpool's second signing of the close season after completing a deal for United States international Whitney Engen in October.

"During my time at Chelsea she was consistent week in, week out," said Liverpool manager Matt Beard. "Off the back of her hard work she was called into the England senior squad.

"She is a fantastic defender and I have no doubt in my mind that she will go on to be a regular in the England squad."

The Reds are recruiting players after ending the 2012 FA Women's Super League season bottom of the table and having released 10 players from their squad.