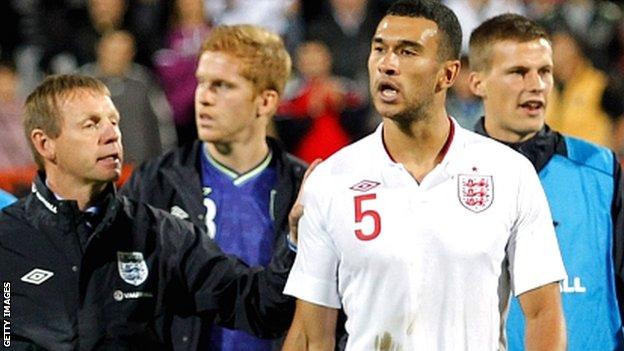 Caulker, England Under-21 assistant coach Steve Wigley and Leeds defender Tom Lees have all been charged after a brawl that took place following England's 1-0 win in Serbia in October.

Defender Caulker, 20, is set to play for Spurs against Wigan on Saturday.

"We spoke to the player," Villas-Boas said. "I think he'll be ready to play."

England beat Serbia 2-0 on aggregate to qualify for the 2013 European Championship, with the second leg marred by a brawl which erupted at the final whistle.

England's Danny Rose was given a second yellow card for kicking a ball into the crowd, but said he had been subjected to racist chants and that he had been hit by stones thrown from the terraces.

Uefa has charged both the Serb and English Football Associations over the conduct of their players and Serbia were also charged with alleged racist chanting.

Villas-Boas continued: "At the moment we don't have enough information, nor do the FA, although there is contact between the FA, the government and the embassy in Serbia to try to find out more information about the speculation that is coming out.

"I am not worried yet with the consequences of what can happen. We are still finding out more information."

Caulker, who signed a new four-year contract at White Hart Lane in the close season, has established himself at the heart of the Tottenham defence under Villas-Boas after spending last term on loan at Swansea.