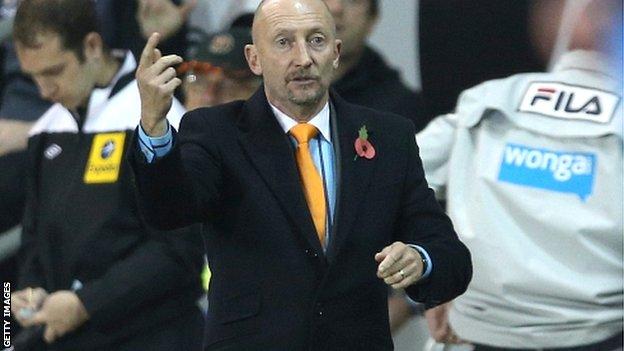 Blackpool boss Ian Holloway has been appointed as Crystal Palace's new manager on a four-and-a-half-year deal.

Holloway, 49, will take charge of Palace with the London club currently fourth in the Championship, six points above 12th-placed Blackpool.

He told Palace's club website: "This is a fantastic opportunity. I got great energy when I met the club's owners and just can't wait to get going."

"It is sad to leave Blackpool as my time there was the best trip I have been on and leave very proud of what was achieved and I would like to wish them all the best," added Holloway, who has also managed Bristol Rovers, Queens Park Rangers, Plymouth and Leicester.

"I just see this as too good an opportunity to turn down.

"I am bringing in Keith as my assistant who is a Croydon boy and he is as excited as I am about the opportunity."

Holloway's former Blackpool assistant Steve Thompson will be in temporary charge for the Seasiders' game with Derby County on Saturday.

Bristol-born Holloway leaves Blackpool after over three years in charge, winning promotion to the Premier League via the play-offs in May 2010 although they were relegated the following season.

And Blackpool chairman Karl Oyston holds no resentment towards Holloway regarding the decision to leave.

"I wish Ian all the best in his new role," Oyston told BBC Radio Lancashire.

"He has done a fantastic job for us during his time here and will be remembered as the most successful manager in the club's history.

"Things happen in football very quickly, as in this case, so I am not shocked by his decision. It suits him to be nearer his family and I am sure he will enjoy the new challenge he has set himself.

"There is no animosity, he goes with my best wishes having served our club so well and the success he brought to the club during his three years here.

"Steve Thompson will take charge of the team at Derby this afternoon. I will then be making an appointment as soon as possible."

Palace chairman Steve Parish had revealed the club had made an approach for Holloway on Thursday.

Holloway took training as normal at Blackpool on Friday morning, but did not join the team on their journey to Derby, although he often travelled separately to away fixtures.

His departure comes only six months after guiding Blackpool to the Championship play-off final against West Ham, where his side lost 2-1.

Holloway will now hope for similar success at Palace, who have not been in the top flight since a one-year stay in 2004-05, and lost their first three league matches of the current campaign.

Six wins out of seven then lifted them into fourth place in the Championship before Freedman's departure.

His assistant Lennie Lawrence was caretaker boss for the Eagles' draw at Barnsley and a notable victory at Leicester, before joining Freedman at the Reebok Stadium.