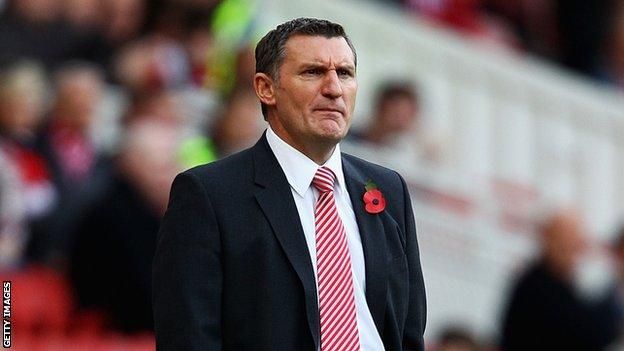 In-form Middlesbrough moved top of the Championship with a dominant home display against lowly Sheffield Wednesday at the Riverside Stadium.

It has been 21 years since Wednesday last won at Middlesbrough. The Owls won 2-0 at Ayresome Park on New Years' Day 1991 thanks to goals from David Hirst and Paul Williams - with current Boro boss Tony Mowbray playing for the hosts.

Middlesbrough knew victory would move them above previous leaders Crystal Palace - at least until the Eagles travel to third-bottom Peterborough on Saturday.

From the first whistle Tony Mowbray's men played with the confident swagger expected of an in-form side, dominating possession throughout with their short, sharp passing game.

He sliced open the away defence after 13 minutes with a perfectly-weighted through ball which Hoyte raced on to before curling into the top corner with the outside of his right boot.

Wednesday levelled in controversial fashion three minutes after half-time when Madine pounced on Michail Antonio's knockdown, despite appearing at least a yard offside.

But Boro restored their lead on the hour mark with Ledesma again the architect. He won possession and fed Scott McDonald, who turned the ball goalwards before Miller tapped in to make sure.

Substitute Jutkiewicz's near-post header from Grant Leadbitter's corner completed victory in front of a 28,229 crowd - Boro's biggest gate since May 2009.