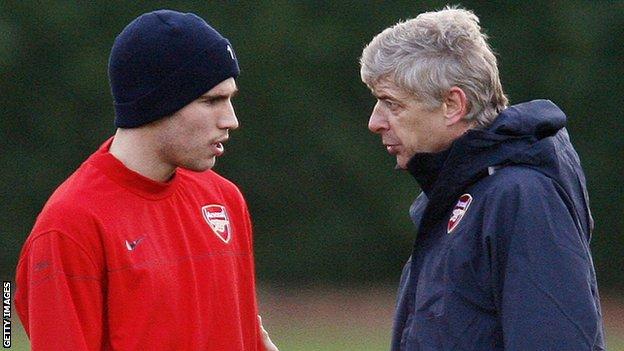 Manager Arsene Wenger has told Arsenal supporters not to abuse Robin van Persie when the striker plays against his old club on Saturday.

It will be the first time the Dutchman, 29, has played against Arsenal since a £24m summer move to Manchester United.

"I hope it [reception] is a respectful one because he did very well for us [for eight years]," said Wenger.

"We campaign against discrimination, it was still the case last week so why should it not be the case this week?"

United boss Sir Alex Ferguson does not believe Van Persie, who scored 132 goals in 281 appearances for Arsenal, will receive a negative reception from the travelling Gunners fans at Old Trafford.

"I don't think that will be a problem," he said. "I think the fans will recognise the eight years he gave them and it will be nice."

Van Persie, who scored 44 goals in 57 games for club and country last season, announced in July he would not extend his existing Arsenal deal and signed for United in August.

Following the transfer Wenger admitted his "regret" at losing a "world-class player", but the Frenchman says Saturday's Premier League match at Old Trafford is not about revenge while admitting he is not surprised at the impact Van Persie has had at Old Trafford.

He has scored nine times in 11 matches for the Red Devils, who are second in the Premier League table.

Robin van Persie has won more points for his team with his goals (nine) than any other Premier League player this season.

"For us, what is important is the result at the end of the game, and the quality of our performance," said Wenger.

"[But] I am not surprised by how well he [Van Persie] is doing. At Manchester United you have good players around him, and Robin is very intelligent around the box - his runs are fantastic and his technique is absolutely amazing.

"There are a lot of players in offensive positions, so with his intelligent runs, of course he will take advantage of that.

"Robin is certainly the most efficient striker."

Sixth-placed Arsenal, who were beaten 8-2 in the same fixture last season, will be without injured striker Gervinho, goalkeeper Wojciech Szczesny, full-back Kieran Gibbs and midfielder Abou Diaby on Saturday.