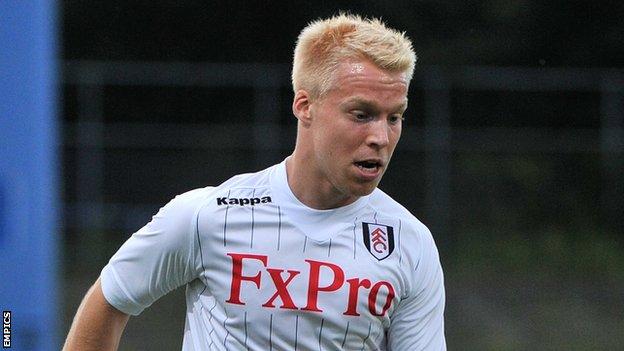 Dalla Valle, 21, was sold to Fulham in the summer of 2010 by Roy Hodgson in the part-exchange deal that took Paul Konchesky to Liverpool.

"We have him here for a month initially and take it from there," said Crewe boss Steve Davis.

"He is quick and mobile and can play on the shoulder, a bit like Max Clayton."

Dalla Valle, who has had loan spells with Exeter City,Dundee United and Bournemouth, goes straight into the Crewe squad for Tuesday's game at Doncaster Rovers.

"It's a no-brainer really," Davis told BBC Radio Stoke. "He's a lad that's got something and has experience of this league.

"Fulham kindly gave us an opportunity to have a look at Lauri with it being FA Cup week for us.

"They said he could play for us in an Under-21 game if we wanted to, but we have seen something in him in training, which makes us thing he will make a difference to us."