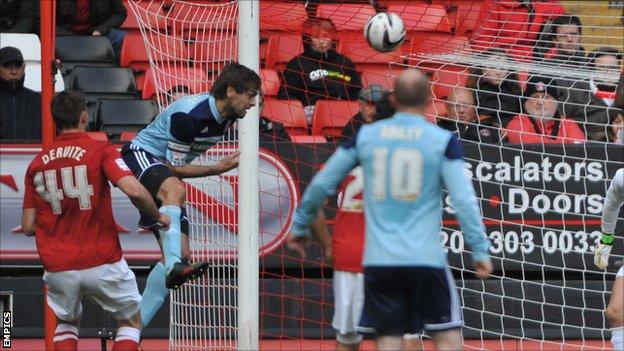 Middlesbrough boss Tony Mowbray has praised the commitment of Jonathan Woodgate, after he returned to action in Saturday's 4-1 win at Charlton.

The 32-year-old defender was brought into the squad following an injury to Seb Hines after missing the last three games with a thigh problem.

"Jonathan wasn't even travelling but he came to my office and said he could play," Mowbray told BBC Tees.

"From not being in the picture to being a star performer, he was immense."

Woodgate netted the equaliser for Mowbray's side, the first of four goals that ensured a sixth successive victory for the Teessiders - and his first career goal for Boro.

Victory leaves Boro level on points at the top of the Championship, although Cardiff are ahead on goal difference.

"It's not just the goal, it's the little headers he gets on dangerous corners. Whenever the ball comes into the box and it gets nicked away it always seems to be Woodgate's head on it," Mowbray said.

"He knows where to put himself and where the danger is.

"I'm delighted he managed to make it today. I have to say, on Friday Seb Hines was going to play but then he came in and was a bit sore."

Four different scorers helped Boro to the points, including Scott McDonald who continued his rich vein of form to hit a fourth goal in three games.

"He's scored again, and his tally will keep ticking along," Mowbray added.

"I hope all season he keeps ticking along and gets himself into double figures.

"If you think we've got Marvin Emnes to come back, Lukas Jutkiewicz came back today and Mustapha Carayol to come back, we look alright in the attacking side of the game."