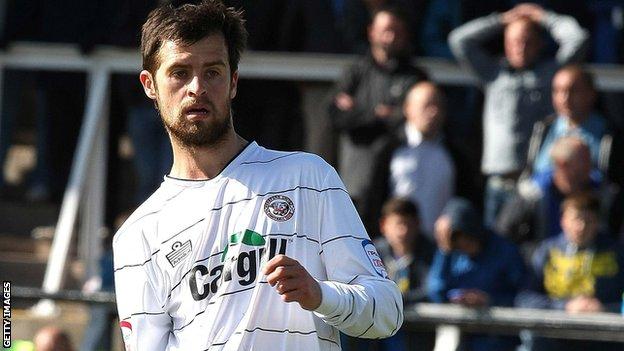 Newport County are hoping to complete the permanent signing of former Wales Under-21 defender Byron Anthony.

Anthony, 28, has been on trial with the club after being released by Hereford in September having begun his career with Cardiff City.

Manager Justin Edinburgh also hopes to recruit two more strikers in a bid to "freshen up" his squad after two defeats from the last three games.

Anthony arrives after a loan spell from Bristol Rovers at Hereford.

He re-signed for Hereford on a non-contract deal at the start of this season but was released after just a fortnight, straight after his red card in a 4-2 win over Cambridge United.

Anthony became a free agent after being released at the end of last season by Bristol Rovers boss Mark McGhee.

He started his career at Cardiff before joining Rovers in the summer of 2006.

Anthony, who also had a month on loan at Forest Green in his final season at Cardiff, played 191 games in all competitions for Rovers, scoring 10 goals.