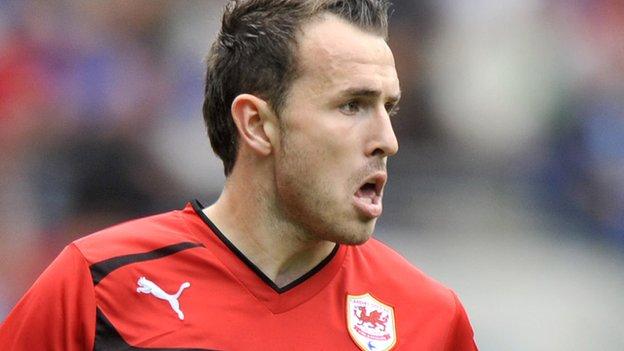 Cardiff City manager Malky Mackay says Jordon Mutch is close to recovering from a foot injury but will not be rushed back into action.

The 20-year-old midfielder, a summer signing from Birmingham City, has been out of action for six weeks.

Championship leaders Cardiff face Bolton Wanderers on Saturday but Mutch will not feature at the Reebok Stadium.

"We've got to tread carefully. I don't want to throw him back in and he comes back out very quickly," said Mackay.

"He's still under the physio's care at the moment. It's something that we're monitoring. At the moment it's nothing long term. He's got a slight issue with his foot."

England Under-21 international Mutch has made seven appearances for Cardiff since joining on a three-year contract but has not played since the 2-0 win at Millwall in September.

Cardiff will once again be without Craig Bellamy and Tommy Smith for the game at Bolton, who will have Dougie Freedman in charge of his first game since succeeding Owen Coyle.

Bellamy and Smith have both been out since suffering injuries in Cardiff's 2-1 win over Watford on 23 October.

Wales striker Bellamy suffered an ankle injury while Smith pulled a hamstring late on in the game at Cardiff City Stadium.

"Both are going to be [out for] weeks rather than days in terms of injuries. They're coming on," Mackay confirmed.

Cardiff have won all seven of their home league games so far this season with their three defeats coming away from home.

Saturday's game at Bolton will be the first of four away games during November and Mackay hopes his side's home form can be reproduced on their travels.

"It certainly gives us plenty of confidence in terms of the performance and the momentum going forward with the last run of games," Mackay said.

"Consistency is the key over a season. Teams go through runs all the way through the season.

"As far as one month is concerned then November is not going to make a huge impact overall on the season.

"We're trying to be consistent and we're trying to make sure that the next run of games we try and pick up as many points as possible to keep the momentum going."