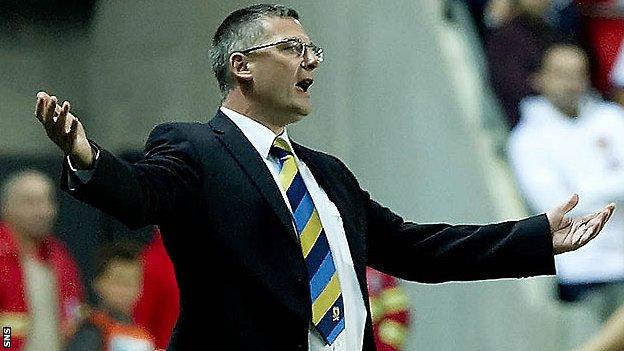 Craig Levein's departure from his post as Scotland coach comes as a surprise to no-one.

Indeed, with a record of only three wins from 12 competitive games, perhaps the only surprise is that it took the Scottish Football Association until now to decide that Levein's time was up.

His appointment almost three years ago was largely welcomed within the Scottish football world.

Ultimately, Levein had run out of plausible defences for a growing list of failings on his watch.

Though he retained the public support of his players, vast swathes of the Tartan Army had grown weary of his inability to produce on-field performances to match his positive and optimistic pronouncements.

In fact, since the friendly victory over the Czech Republic in his opening game in charge, it is difficult to recall a moment that could be described as a genuine highlight of his tenure.

His second game was an unimpressive 3-0 defeat in Sweden, but it is on competitive results he has been judged and, in that regard, he has come up sadly short.

A humdrum goalless draw in Lithuania signalled the beginning of the Euro 2012 qualifying campaign, followed four days later by an excruciating encounter with Liechtenstein, a nation ranked 100 places lower than Scotland.

That ended in a 2-1 victory, courtesy of a goal six minutes into injury time.

However, it was the subsequent match - away to the Czech Republic - that began to turn public opinion against Levein.

His decision to experiment with a 4-6-0 formation proved futile, with the Czechs winning 1-0 and the coach responding to criticism by refusing to accept that he might have got things wrong, a trait that was to re-emerge.

Strangely, as Scotland lost again - this time 3-2 at home to the world and European champions Spain - they came as close to achieving a creditable performance and result as they did throughout Levein's reign.

His side clawed back a two-goal deficit with a highly creditable second-half performance, only for Stephen McManus - the goalscorer against Liechtenstein - to gift a winner to the Spaniards.

There was then an 11-month hiatus between qualifiers, during which time there were hints of better things to come with friendly wins over the Faroe Islands, Northern Ireland, Wales and Denmark, interspersed with defeats by Brazil and the Republic of Ireland.

Also, crucially, striker Steven Fletcher let it be known that he did not wish to be considered for selection, having been overlooked for the matches against the Czech Republic and Spain.

That led to a lengthy stand-off, which only ended last month when the player and Levein put their differences behind them - too late, as it transpired, to save the manager.

Any hopes the Scots had of reaching the Euro 2012 play-offs were effectively ended when the campaign resumed in September 2011.

Needing a victory at home to the Czechs, the Scots led twice, but a late and controversial penalty decision went against them and they emerged with just a point.

Subsequent wins over Lithuania and Liechtenstein were effectively meaningless, as was the final defeat in Spain.

Despite the failure to reach the play-offs, Levein spoke of improvement and stated that Scotland were capable of winning all of their qualifying matches in a World Cup group that featured Belgium, Croatia, Serbia, Macedonia and Wales.

Alas, that prophecy was to come back to haunt him as dour home draws were garnered against the Serbs and Macedonia, with accusations of overly cautious tactics again levelled at the manager.

So, when he brought back Fletcher and another cause celebre of the media and fans - Kris Commons - for the double-header away to Wales and Belgium, it looked like a last roll of the dice by a hitherto intransigent character.

Both players featured in both matches, but neither was able to prevent the team losing in Cardiff and then in Brussels, as the qualifying campaign stuttered further.

Chief executive Stewart Regan and the Scottish FA board refused to come to a knee-jerk decision but after days of discussions arrived at what results suggest was the only logical conclusion.

Levein has been closely involved in the SFA's attempt to overhaul Scottish football from top to bottom.

While this project may yet prove to be a fruitful one in the long term, Levein's primary task was to return success in the short term, something he was unable to do.