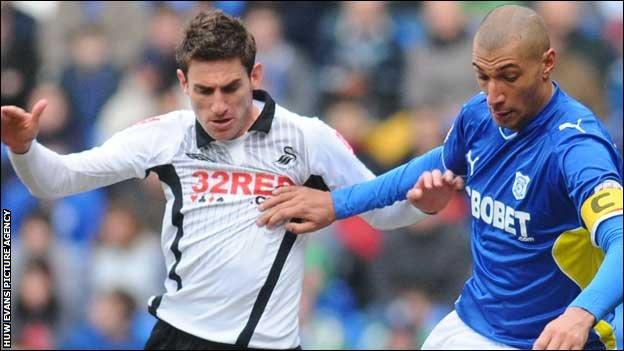 Swansea City chairman Huw Jenkins has insisted it would be "good for everybody" if Welsh rivals Cardiff City joined his Swans in the Premier League.

Swansea became the first Welsh team in the Premier League following promotion in 2011 via the Championship play-offs.

"If Cardiff were promoted, it would be good for Welsh football," said Jenkins.

They have reached two subsequent play-off semi-finals only to suffer more disappointment.

Malky Mackay's men are now back on top of the Championship and are hoping for their sixth win in seven matches at The Reebok Stadium on Saturday.

The Bluebirds have strengthened their Premier League push this season with the signings of forwards Craig Bellamy, Craig Noone, Tommy Smith and Heidar Helguson.

And should Cardiff finally secure promotion, Jenkins says he would be glad to see it.

"[The Premier League] is the best league in the world and gets the most publicity," said Jenkins.

"So Cardiff winning promotion would be good for Welsh football and good for everybody.

"Cardiff have been very unlucky over the last few years and they've been knocking at the door. But to keep that club at the top of the Championship and competing is a difficult task.

"Malky Mackay has done a great job and it looks like this could be the year they could take that extra step."

Jenkins hopes his Swansea side can build on their midweek League Cup win at Liverpool - where the Swans qualified for the quarter-final for the first time time in their history - when they take on Chelsea on Saturday.

Michael Laudrup's men, however, have been beaten in four of their last six league games so Jenkins is more concerned that his club extends their two-year stay in the Premier League.

"It is important from our point of view that one team is in the Premier League and that is ourselves," he insisted.