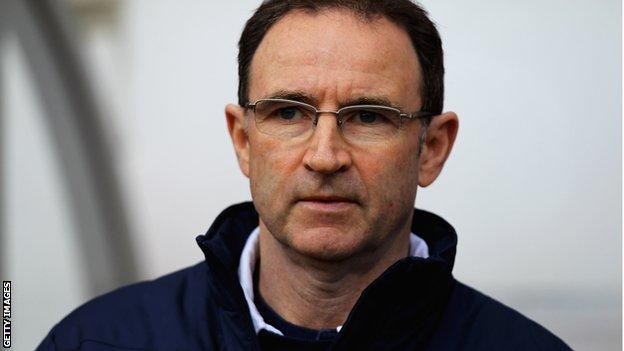 Martin O'Neill says he is determined to establish Sunderland in the Premier League, but warned it could take a little time to achieve.

The Black Cats host Aston Villa on Saturday looking to secure only their second league win of the season.

"Take out the top six and the rest of us can't talk about being established in the Premier League," said O'Neill.

"Eventually, in time, Sunderland will not only want to be established, but also competing at the top level."

To add to their disappointing league form, Sunderland were also knocked out of the Capital One Cup in midweek, losing 1-0 to local rivals Middlesbrough.

"I understand that people here want success, they want it as quickly as possible and there is obviously disappointment when we go out of a cup competition as we could have progressed into the quarter-finals," added O'Neill.

"I am very disappointed with that, it is my responsibility and therefore I will do everything I can to change that round in the course of time.

"I am not talking about 10 years, which you don't get in the game, but I am talking for a period of time and I really want to make a team here that can compete and be successful."