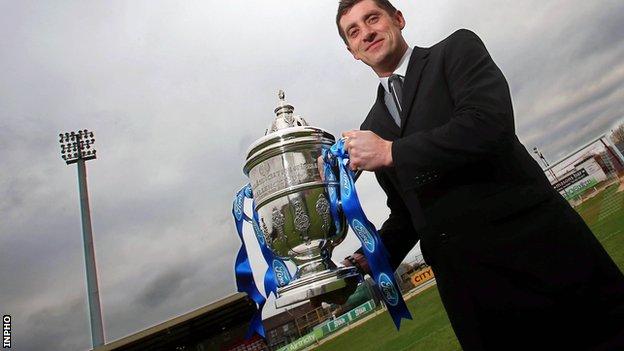 Declan Devine is targeting an FAI Cup triumph as a stepping stone to further success for Derry City.

The Candystripes play St Patrick's Athletic in Sunday's FAI Cup final at the Aviva Stadium bidding to win the trophy for the first time since 2006.

Devine has pointed to Sligo Rovers as an example of how it is possible to turn Cup glory into league success.

"We want a taste of that, to be back where I believe we belong, at the top echelons of Irish football," he said.

Derry have a clean bill of health ahead of a game which is a repeat of the 2006 decider, which the Candystripes won 4-3 after extra-time. 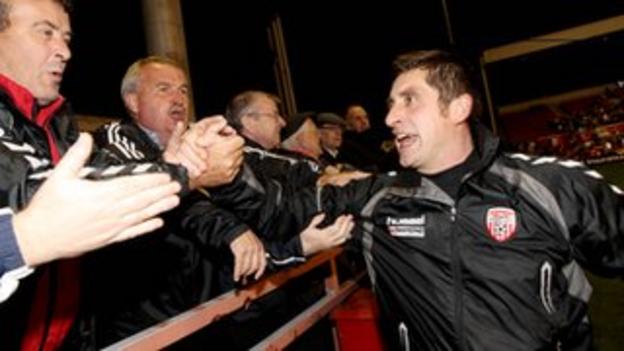 Devine is preparing for Sunday's game to go the distance again, and intends to maximise the resources at his disposal.

"It's not nice being left out of the team for a cup final but the reality is that we have a strong group of players," the Derry manager told BBC Sport.

"If we win, it'll be because of the squad and not just the first eleven players.

"The last three cup finals have gone to extra-time so we've got to be prepared for that too, and have a strong bench."

Devine is hoping to chart a similar path to silverware with Derry City.

He explained: "Three years ago, this club was on its knees".

"We were at the bottom of the first division and we had to regroup and reform and people have got behind the team again.

"We have a group of local players - I think only three are not from the north-west area - trying to take us back into European football and that can only be beneficial for the city.

"What Sligo Rovers have done is the benchmark in terms of pushing on to win a league championship.

"They got the taste of silverware, they got into Europe and look at them now - they have full houses week in week out because they're used to success."

Devine is anticipating a high-scoring game on Sunday between two attack-minded teams.

However, he has a feeling that it is the team with the best defence that will ultimately prevail.

"In cup finals, I thnk the teams who give little away are the ones who go on to be effective in the game.

"We're looking first and foremost to take the game to St Pat's. We're looking to ask questions of their back four, while at the same time keep ourselves solid and give nothing away."