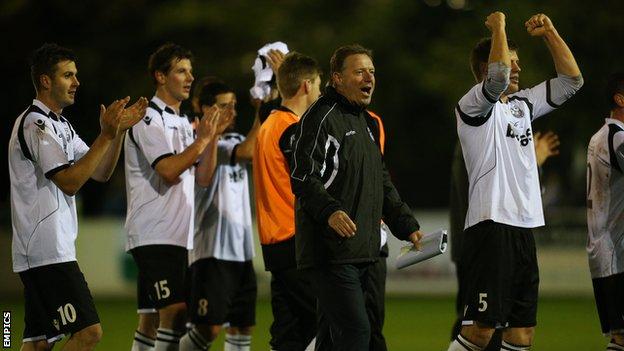 Cambridge City boss Gary Roberts has described his pride after seeing his non-league side hold MK Dons to a 0-0 draw in the FA Cup first round.

The League One side had most of the possession but could not breakthrough against the tireless Southern League Premier outfit on Friday night.

"We were never going to get out of our half that much but the do-or-die effort was terrific."

He added: "The odds were stacked against us. We were something like 8-1 on our own ground to win. The effort was tremendous."

Despite the 102 places between the teams on the football pyramid, the Lilywhites were able to hold out and avoid defeat against a Football League side for the first time in their history.

Dons hit the woodwork twice while goalkeeper Zac Barrett had to produce heroic blocks to keep Karl Robinson's side at bay.

"Zac's been in and out of form this season. But over the last couple of weeks he's shown how good a keeper he is," added Roberts, who led City out against the Dons in a second-round defeat eight years ago.

"The pleasing thing as well was the younger players - they showed what they're capable of.

"The Cup dream carries on into the middle of November. How long is it since we could say that? It's a fantastic night for the club. It shows we can put on games like this and the fans will turn out.

"Let's see what the draw does - it may give us an extra incentive."

Cambridge chairman Kevin Satchell is overseeing a move for the club from their Milton Road home to the nearby village of Sawston.

He added: "We'll be in the draw on Sunday. At least we're there and we've got that chance of getting through.

"There's a lot of people here who have put in a lot of hours. For all of us it's great - it's something the club's never done before, we've lost every time we've played a league club in our history. Finally we've not lost one.

"This doesn't do us any harm in terms of the exposure the club's getting and the income we get from a replay."