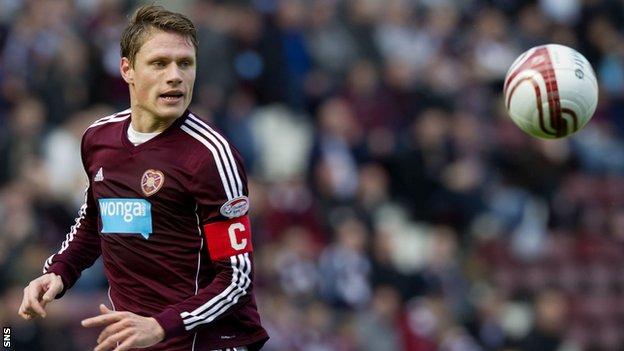 Hearts captain Marius Zaliukas has written an open letter to fans, urging them to get behind the share sale by club owner Vladimir Romanov.

The Lithuania-based businessman has put 10% of the club up for sale and Zaliukas says he will be personally investing in Hearts.

Lithuania midfielder Zaliukas says the Scottish Cup success in May was one of the proudest moments of his career.

"For this reason, I will be supporting the club's offer," said Zaliukas.

"I want this club to enjoy more 'days in the sun' and, with your help, we will be able to do exactly that."

The Scottish Premier League club have a registration ban imposed on them at present after failing to pay a number of players on time in the past few months.

Zaliukas admits that recent financial problems have made it a difficult time for everyone involved at Tynecastle.

"It is no secret the club faces financial challenges, but we have a bond that can protect us if we all pull together," he added.