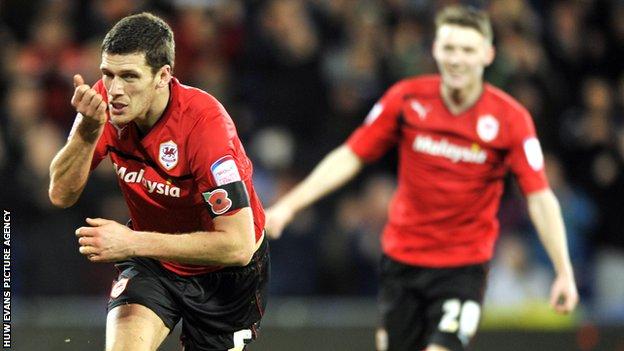 Goals in each half from Heidar Helguson and Mark Hudson saw Cardiff get back to winning ways in the Championship with victory over Hull City.

Helguson gave the home side the perfect start when he scored with a brave header from Craig Noone's cross.

Cardiff wasted several chances to extend their lead before Hudson sealed victory with a diving header from Aron Gunnarsson's cross.

Robert Koren scored a late consolation but Cardiff held on for the win.

The win was Cardiff's eighth consecutive victory at Cardiff City Stadium and a much needed three points after two away defeats.

Steve Bruce, taking charge of a team for the 600th time, made just one change with injured son Alex being replaced in defence by Abdoulaye Faye.

Cardiff, as had been the case in two of their previous three games, were ahead within the opening five minutes.

From Noone's cross, Helguson nodded home to give his side the lead but the former QPR player required lengthy treatment for his bravery.

Having taken the lead Cardiff were looking comfortable and chances continued to come their way.

Hudson, who was making his 300th career league appearance, saw a header rattle the bar while Joe Mason and Gunnarsson also went close.

Hull began to come back into the game as the match headed towards the interval with Koren having a shot blocked before Sone Aluko's effort went over the bar.

The Tigers did have the ball in the net just before the break but Jay Simpson's effort was ruled out for offside.

Ben Amos denied Noone early in the second half while Helguson failed to test the Hull keeper a minute later.

Aluko then came close to his seventh goal of the season in the 70th minute with a 25 yard free-kick that clipped the bar.

The impressive Peter Whittingham then tried his luck from a free-kick only to see Amos make a sensational save.

But a minute later captain Hudson's flying header sealed the victory for Cardiff before Whittingham struck the bar with a 30 yard free-kick.

Koren set up a nail-biting finale with a stunning 25-yard volley in stoppage time but Cardiff held on for a much needed and deserved win.

Cardiff City manager Malky Mackay said: "We started like a house on fire. We looked like we could have scored three or four.

"We went on the front foot in the second half and didn't give them a breath. I always thought the second goal was coming. They scored a wonder goal at the end, but I'm proud of my players.

"I'm delighted that we have the best home record in English football and we're only two points off the top of the table. But I won't let up on them. We will try to be as consistent for as long as possible."

Hull City manager Steve Bruce: "I thought Cardiff were the better side and we were nowhere near the level we've been at in recent weeks.

"But it might have been different had the disallowed goal been given. It was a big turning point in the game. It's a baffling and ridiculous decision and a big call.

"It's a difficult one to take. Even though we haven't played well in the first half, we were getting into the game in the last 15 minutes. If we'd scored then it might have been a different story."