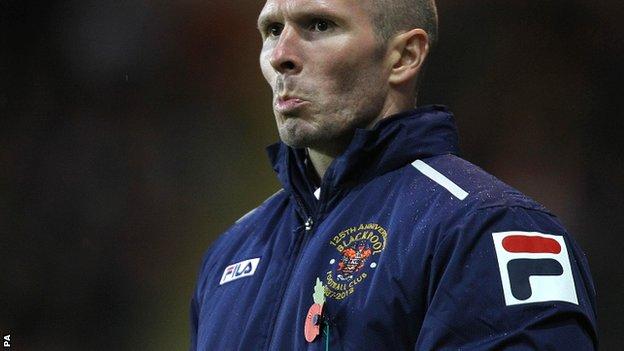 Blackpool came from behind twice to force a 2-2 draw with Bolton and avoid defeat in their first match under new boss Michael Appleton.

Mark Davies put Wanderers ahead after an error from Alex Baptiste but Blackpool levelled within 60 seconds as Tom Ince curled in from the edge of the box.

But substitute Nathan Delfouneso kept a cool head to finish from close range and ensure the points were shared.

Appleton received an excellent reception from the home fans before the match and was rooted to the edge of his technical area throughout the 90 minutes.

The 36-year-old, who was confirmed as successor to Ian Holloway on Wednesday, wrote in his programme notes that being "an administrator, an accountant and a politician" during his 12 months at Fratton Park had made him a stronger manager.

And his side needed to show all of their mental strength, twice coming from a goal down to earn a point.

Two goals in a minute brought the game to life, the visitors striking first.

Bolton on the road

Baptiste slipped as he tried to clear a through ball from Martin Petrov and midfielder Davies raced away from the Blackpool skipper before slotting the ball underneath Matt Gilks to open the scoring.

But Bolton's lead was short-lived, as Ince cut inside from the right wing and unleashed an unstoppable left-foot shot that flew past Wanderers goalkeeper Adam Bogdan for the winger's ninth goal of the campaign.

Buoyed by their immediate equaliser, Blackpool looked to seize the initiative and Ludovic Sylvestre tested Bogdan with three long-range efforts, while Craig Cathcart headed over from a corner.

Both teams were intent on getting their wide players into the game, Ince in particular catching the eye, while Petrov almost put Bolton back in front with a scuffed effort that Gilks fumbled before gathering at the second attempt.

Appleton made an attacking switch at half-time, replacing Gary Taylor-Fletcher with Delfouneso, while Wanderers boss Dougie Freedman introduced Lee in place of Petrov shortly after the interval, and it was the South Korean who would restore Bolton's lead after a bright spell for the hosts.

Stephen Crainey gave possession away cheaply, Chris Eagles latched onto a lofted pass from Davies and crossed from the right for Lee to slide in and finish from close range, as Wanderers moved in sight of their first win at Bloomfield Road since December 1977.

Blackpool, who had earlier gone close when Chris Basham headed straight at Bogdan, sent on predatory striker Kevin Phillips for the final 10 minutes and his impact was immediate.

The former England man's close-range volley, his first touch, was well blocked but Bolton were unable to clear and, from the resulting scramble, Delfouneso side-footed the ball high into the corner of the net from six yards to level the scores again at 2-2.

And Phillips almost embarrassed Bogdan with an impudent chip from 30 yards that had the Bolton keeper scrambling back to palm the ball over his crossbar.

Bolton, who remain unbeaten in three matches under Freedman, pushed for a winner in a pulsating three minutes of stoppage time, but could not break through a stubborn Blackpool defence.

"After going behind twice, you've got to come away reasonably happy with a point.

"But when you break the game down, the amount of possession we had, it's disappointing that we didn't take the opportunities we had early on in the game.

"You begin to separate the men from the boys in around February or March. Hopefully we'll be in and around it by that time."

"It was a fantastic game of football, between two teams who wanted to win.

"We were in the lead twice and it was disappointing to concede, but over the 90 minutes, I felt a draw was a fair result.

"I thought we played some fantastic stuff attacking-wise and defended quite well.

"They never really cut us open that much so it was very pleasing from that aspect, and to get a couple of goals is also pleasing."