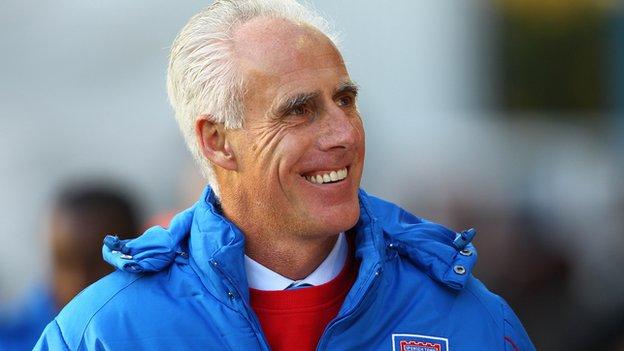 Ipswich moved off the bottom of the Championship as they beat Burnley courtesy of DJ Campbell's late strike.

Daryl Murphy beat keeper Lee Grant to the ball, heading in a Richie Wellens cross to put the home side in front.

Sam Vokes equalised when he went up with defender Danny Higginbotham to meet a Junior Stanislas cross.

The victory was McCarthy's second in three games and came on the back of a 5-0 thrashing by Crystal Palace in midweek.

Meanwhile, the defeat was Burnley manager Sean Dyche's first since he took over at Turf Moor.

Ipswich threatened a goal first when Campbell had a shot saved by Grant, before Guirane N'Daw put the rebound high over the bar.

Grant again denied Campbell by tipping the striker's shot around the post.

The Burnley keeper could not stop Murphy heading Ipswich in front when the two went up to challenge for a cross and, despite Burnley's players surrounding the referee claiming a foul, the goal was allowed to stand.

Vokes levelled with 10 minutes to go but Campbell had the final say.

"It wasn't pretty, silky or sexy, but it was dogged and determined and all those horrible words people don't like that are vital to winning games.

"I've been stressing the importance of being organised and hard to beat. It's a league of teams that are hard to beat.

"There will be times when we make mistakes, lose goals and lose games. But what we don't do is give up and give in and that was a performance that epitomised it."

"It was nip and tuck throughout but, on reflection, I thought we deserved at least a share of the spoils.

"It was always going to be difficult. Ipswich were looking for a reaction and we were coming to a place where they were desperate for a win.

"But overall I thought our players put in another really strong, physical shift."