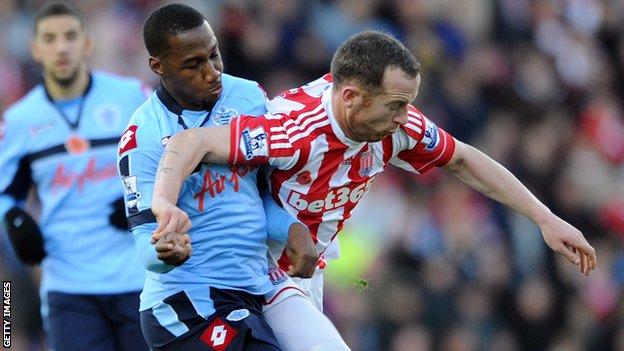 Midfielder Adam capitalised on hesitant defending to drive a shot beyond Julio Cesar early in the second half.

"QPR had a lot of possession and a lot of promising moments but their awful run continues as Charlie Adam's first goal for Stoke gave them victory. QPR lacked self-belief at the crucial times to find what would have been a precious equaliser. For Stoke, the win moves them clear of relegation danger."

QPR had chances to equalise, with Adel Taarabt going close on a number of occasions, while Asmir Begovic did well to keep out Esteban Granero's effort.

But Stoke held firm to record only their second victory of the season.

Southampton's 1-1 draw against Swansea resulted in the Saints leapfrogging the Hoops at the foot of the table.

QPR, searching for their first league win, were hoping for a repeat of last season's corresponding fixture. Their 3-2 win at the Britannia Stadium 12 months ago was the last time they savoured all three points on the road.

Hughes's side certainly started brightly enough as they enjoyed plenty of possession during the early exchanges.

But a lack of ideas in the final third cost them dearly, and there was always the danger they would be caught out by Stoke.

In the eighth minute, Adam gave notice of his intentions, striking a low drive from just outside the area which took a nick off a defender as it flew just wide.

The visitors continued to see plenty of the ball, but were still not really troubling the Stoke defence and, as the half wore on, the home side started to improve.

They came within inches of breaking the deadlock in the 37th minute as Geoff Cameron, Adam and Steven Nzonzi all combined before the latter sent a low ball into the area for Peter Crouch, whose shot was deflected just wide by Anton Ferdinand.

But the best opportunity for either side in the first half came a minute before the break.

Junior Hoilett led a quick counter for QPR and squared a pass to put Taarabt clear, but the mercurial Moroccan floated his dinked effort onto the roof of the net when he perhaps would have been better to opt for power.

Stoke capitalised fully in the 52nd minute when Robert Huth's free-kick into the area was flicked on by Jon Walters. The ball fell to Adam at the back post, and the former Liverpool midfielder drove a half-volley beyond Cesar.

Taarabt almost responded a minute later when his deflected shot was pushed over by Begovic.

The tricky forward then wriggled his way past two defenders but could only flick the ball wide.

QPR continued to pressure the Stoke defence and only a superb save by Begovic, clawing away a Granero strike that looked destined for the top corner, prevented an equaliser.

But the visitors failed to capitalise on their spell of pressure and eventually Stoke regained control of the game to finish the half strongly and only a fine, low save by Cesar from Michael Kightly's shot prevented Stoke's lead being doubled.

Stoke manager Tony Pulis said: "It was an important win for us. We have played very well in the first 10 games but not really got the return we deserved. Today was as average a performance as we have put in but the big thing was to get three points.

"It was an open game today and the first goal was always going to be important. QPR had chances and if one of them went in it would have been difficult for us to come back.

"During our time in the Premier League it has evolved that teams are showing us much more respect and it is something we have to deal with. We are evolving as a much more fluent team but we want to evolve in getting results as well."