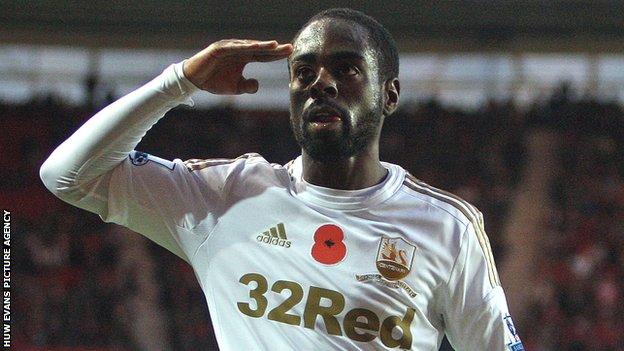 Southampton squandered more points from a winning position as a defensive howler allowed Swansea to end a run of three successive away defeats.

Morgan Schneiderlin put the beleaguered Saints ahead with a composed finish from Rickie Lambert's set-up.

Southampton move off the bottom after Queens Park Rangers lost at Stoke, but that will be scant consolation for manager Nigel Adkins as he fights to save his job.

The Saints have now surrendered 13 points from winning positions this season, and they were the masters of their own downfall after gifting Swansea an equaliser they hardly looked like getting.

Dyer, a graduate of Southampton's academy, took the chance well and gave Swansea their first point on the road since their 5-0 win at QPR on the opening day of the season.

Southampton came into the match knowing that only once has a team not been relegated after losing eight of their first 10 games. The tension surrounding the club's predicament manifested itself in the stands, resulting in a subdued atmosphere at St Mary's.

The Saints certainly played the more direct football and had early sights at goal through Adam Lallana and Gaston Ramirez that failed to trouble Gerhard Tremmel in the Swansea goal.

Centre-back Jose Fonte was also denied at the far post by a lunging block from Swansea's 19-year-old left-back Ben Davies.

Most of Swansea's limited attacks veered towards Shaw's flank. The most significant opening of the first half released right-back Angel Rangel, but his low cross from inside the area was cleared at the front post with Michu unmarked in front of goal.

"Southampton manager Nigel Adkins didn't get the result he needed and the speculation over his position will intensify. At this stage of the season, a home draw is not enough, as I'm sure the Southampton hierarchy will agree."

The striker stood alone in the tunnel for several minutes at half-time, an indication of the visitors' growing frustration at the lack of any cutting edge or spark.

Home pressure finally began to grow after the break and Sung-Yueng Ki, who forced the only save from Southampton keeper Paulo Gazzaniga in the first half, made a crucial intervention to deny Lambert.

Garry Monk, making his 250th appearance for Swansea at the club that launched his career, then threw himself to block a Ramirez shot.

But the pressure finally told as Schneiderlin scored to release a wave of relief around St Mary's.

Lambert had won his fair share of headers and when he rose unchallenged at the far post to head across the face of goal, Schneiderlin showed great agility to chest the ball and then head past the advancing Tremmel.

The lead lasted all of nine minutes, though. Gazzaniga's pass put centre-back Maya Yoshida under unnecessary pressure and his poor first touch allowed Dyer to pounce.

The winger, a 56th-minute substitute, drove into the area and his low strike across the face of goal went in off the post.

Lambert twice threatened with headers but a sense of nervousness grew among the home defence and only a desperate lunge from Fox denied Shechter a tap-in.