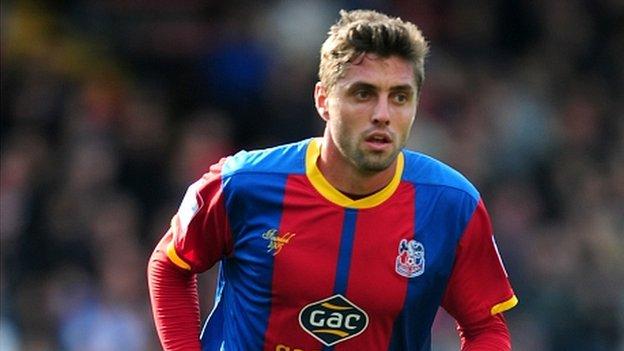 Crystal Palace scored two late goals to defeat Peterborough and return to the top of the Championship table.

Grant McCann gave Posh the lead with an early goal from close range.

Palace fought back but their pressure did not tell until 10 minutes from time when Andre Moritz cut inside and fired a left-foot shot in off a post.

The comeback was complete when Wilfried Zaha raced down the right and passed to Kagisho Dikgacoi, who scored to extend Palace's unbeaten league run to 13.

The Eagles are one point clear of Middlesbrough, who had temporarily displaced them in top spot after a 3-1 victory over Sheffield Wednesday on Friday night.

New Palace boss Ian Holloway, whose side beat Blackburn 2-0 in his first game in charge, saw them fall behind after six minutes.

McCann, who had recovered from the groin injury that saw him withdrawn early in the second half of their midweek defeat at Brighton, slotted home following some fine work on the left-hand side from George Boyd.

Palace immediately had two chances to equalise as Peter Ramage headed wide from Owen Garvan's cross before Zaha's effort from the edge of the box was diverted over the crossbar by goalkeeper Robert Olejnik.

After the break, the Austrian also pushed an 18-yard effort from Glenn Murray over the bar and then tipped Zaha's 20-yarder round a post.

Substitute Moritz provided the spark Palace needed when he picked up the ball on the left-hand side of the penalty area and sent a left-foot shot beyond Olejnik and into the net off the far post.

Palace completed the turnaround two minutes later with a superb breakaway goal as Zaha galloped clear to set up Dikgacoi for the winner.

"You never say never with the lads that I have in that dressing room and it is a great place to be at the minute.

"We were terrific from start to finish and I always believed that if we could get ourselves level a second goal might follow.

"That's exactly how it turned out and the manner of our second goal, which started from a punch from my keeper, was fantastic.

"Peterborough defended really well and Darren (Ferguson) will be disappointed because he won't feel he owed us anything, but that stats will tell you that we deserved the points."

"Zaha is the best player in this league and will go to the top. He was unplayable at times but we didn't help ourselves by endlessly giving away the ball due to poor passing.

"We were well beaten and I'm firmly of the opinion that after 16 matches you deserve to be where you are in the league table.

"We are well aware of the position we are in and know the challenge we have ahead. We need to win 13 of our remaining 30 games to keep ourselves in this league.

"I believe I have a good squad and that we can overcome any blows we've suffered so far, but you better ask the players if they can."