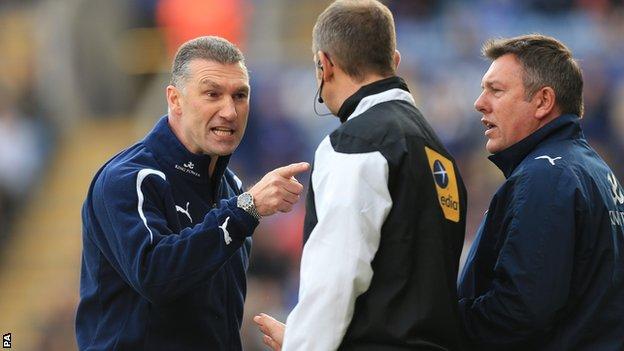 A contentious penalty decision allowed Nottingham Forest to earn a draw at Leicester in the East Midlands derby.

The home side went in front when Forest defender Elliott Ward turned a Lloyd Dyer shot into his own net but Adlene Guedioura steered in an equaliser.

Nottingham Forest have now drawn eight of their 16 Championship games.

Whitbread appeared to get the ball but Simon Cox stepped up to level.

City's misery was further compounded late on when they felt they should have had a late spot-kick of their own, against Simon Gillett for handball.

Leicester, without a win in four league games, will be frustrated by only getting a point from a game in which they had the upper hand for large periods.

After Ward's own-goal, Forest equalised with a well-worked and incisive move.

Chris Cohen's pass from the right wing found Cox and he cut the ball back for Guedioura to drive in from 15 yards.

Soon afterwards, though, the Foxes regained their lead as Knockeart's lovely chipped ball was delicately glanced home by Nugent for his seventh goal of the season.

Waghorn also had a header excellently palmed away by keeper Lee Camp before the late drama of the two debateable penalty decisions which both went Forest's way.

"It should not be a penalty. It was a perfectly good challenge. He got the ball and the referee is in a very good position to see it.

"If he cannot get that right it is laughable. It is about time these people became accountable.

"There is a team of four people out there and we need to utilise the four of them. I have seen the incident on television again and basically it is a good challenge from Whitbread."

"I can see why the referee gave it, but in my view it was not a penalty.

"I was tearing my hair out throughout the game and to be honest about it, we were lucky.

"We got lucky and I hope it is another 20 games before we play like that again. We have played a lot better than that and come off losing matches."