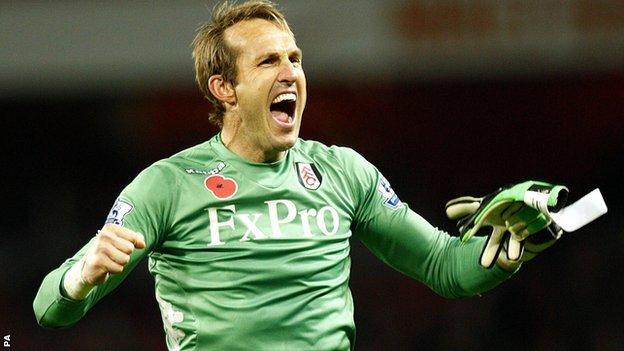 Mikel Arteta missed a last-minute penalty as Arsenal had to settle for a draw after a thrilling six-goal encounter with Fulham.

Olivier Giroud's header and Lukas Podolski's close-range strike looked to have put the Gunners in control.

But Dimitar Berbatov inspired a Fulham reply, heading in before teeing up Alex Kacaniklic's 40th-minute equaliser.

It was a dramatic climax to an exciting match, with referee Phil Dowd blowing the final whistle immediately after the Australian keeper's full-stretch save low to his left.

Had the penalty gone in Fulham would have felt aggrieved, as the award of a spot-kick against Sascha Riether looked harsh, with the defender doing his best to withdraw his arm as Andrei Arshavin crossed.

Arsenal might have expected an altogether less eventful afternoon - they have not lost at home to Fulham in 108 years.

But they had more reason than usual to fear the visitors before this match, having made their worst start to a Premier League season under manager Arsene Wenger.

"What a climax, what a finale. That was two points thrown away by Arsenal and Arsene Wenger's expression at the end told you everything you need to know."

Add to that the fact the Cottagers are no longer the pushovers they once were on the road - they had earned 16 points from their previous 16 away matches and were level with the Gunners on 15 points before kick-off - and there was plenty of cause for concern at Emirates Stadium.

But any pessimism generated by the Gunners' run of three defeats in their previous six matches quickly evaporated as the home side seized the initiative.

Despite seeing little of the ball in the opening exchanges, they took the lead when Giroud headed in from Theo Walcott's right-wing corner after 11 minutes.

It was a timely second league goal of the season for Giroud, who is under pressure for his central striking role from Walcott and Podolski, who have both stated their desire to start up front rather than out wide.

But the attacking trio's shape was clearly working, as midway through the half, with Fulham temporarily down to 10 men because of an injury to Kieran Richardson, Podolski doubled the lead, converting from six yards following Arteta's cutback.

Fulham, though, refused to be discouraged and continued to probe patiently. Only the division's top team, Manchester United, have scored more than them this season and they soon showed their attacking prowess.

Much of their potency has come via Berbatov, who was central to their swift response, first capitalising on static Arsenal marking to nod in from Bryan Ruiz's corner, then turning provider to cross for Alex Kacaniklic to head beyond Vito Mannone.

Arsenal needed a show of character and Walcott, on his first Premier League start since the opening day of the season, began to emerge as a threat.

But, against the run of play, Arteta dawdled on the edge of his area and was robbed of possession by Ruiz, who was then bundled over by the Arsenal midfielder, with Dowd pointing to the spot.

Berbatov coolly converted for his second of the match to give Fulham hope of a historic victory in north London.

Arsenal, though, responded almost instantly. After being played in by Santi Cazorla, Giroud's shot struck the post but bounced out to Walcott, who crossed for the Frenchman to score his second header of the match.

Both sides had chances to snatch victory, with Giroud going close to a hat-trick with a 30-yard effort saved by Schwarzer and Ashkan Dejagah failing to capitalise when in space inside the area before Arteta's penalty miss.

But a point apiece was ultimately a fair outcome from a game which both sides will feel they might have won.

Fulham manager Martin Jol: "We played some fantastic stuff. Before the game we said we would try to dominate them, which is hard here, but we managed that.

"I can't remember being 2-0 down - especially here - then being 3-2 ahead and we could have scored two or three goals after that.

"I really thought this could be the first time ever [for Fulham] to beat them away, but in the end it was not to be.

"However, if you concede a penalty in the last 20 seconds and then still do not lose, maybe we should be pleased in hindsight."