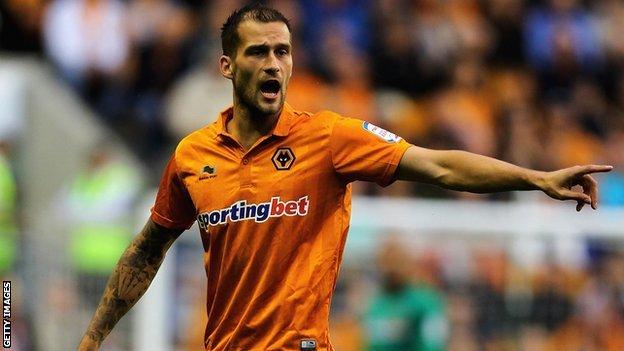 Roger Johnson's last-minute equaliser rescued a point for 10-man Wolves against Brighton in the Championship.

The hosts led twice, through Bakary Sako and Tongo Doumbia, either side of Craig Mackail-Smith's equaliser.

By the time Doumbia struck Wolves were without Karl Henry after he was sent off for a tackle on Liam Bridcutt.

Will Buckley quickly equalised for the Seagulls, who thought they had won it through Stephen Dobbie's late penalty, only for Johnson to rescue Wolves.

Wolves have gone six games without a win, their last Championship victory coming against Blackburn on 6 October

Only two points separated the sides before kick-off but so congested is the Championship that Wolves began the day in 13th, Brighton were on the periphery of the play-off places in eighth.

Despite a slow start, Wolves took the lead against the run of play midway through the first half when Sako was played in by Kevin Doyle at the end of a superb passing move and he slotted past Tomasz Kuszczak from 12 yards.

Mackail-Smith equalised from a similar distance just before the break, capitalising on Bruno Saltor's pass to find the top corner.

That goal angered Wolves boss Stale Solbakken, who punched a hole in the roof of the dugout in frustration, but he was doubtless even more unhappy moments later when Henry was shown a straight red card for a poor challenge.

Despite finding themselves in the bottom half of the table, there is no doubting Wolves' spirit, and they took the lead on 61 minutes when Doumbia scored superbly from 25 yards.

But Brighton made their one-man advantage count when Buckley's low shot beat Carl Ikeme. Dobbie then converted from the spot with a minute remaining after Christophe Berra was controversially adjudged to have handled.

There was still time for a Wolves response, though, and it came from an unlikely source as Johnson rose superbly to power in a header, earning his side a hard-fought point.

"The ref made a big mistake. When it is one minute left you should be 100% sure that it is a penalty and it was far from a penalty.

"If we had lost 3-2 after the guts the guys showed in the second half it would have been hard to pick them up.

"I think the referee got the red card spot on, but when you see the replay for the penalty it is so far from a penalty."

"It's disappointing. We let too many people down today, it wasn't my team out there today. First you need to do the basics, it wasn't good enough.

"Whatever the position you play, you need to be aware of the basics in football. Unfortunately we didn't do this and it's a bad day today.