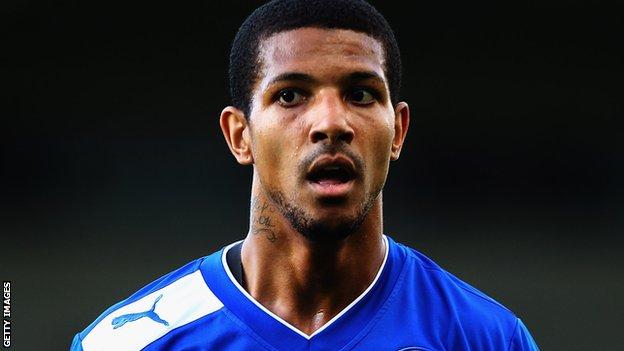 Jermaine Beckford marked his return from injury by scoring the winner for Huddersfield at Barnsley and take Simon Grayson's side back into the top six.

Marlon Harewood had chances to snatch an equaliser for Barnsley.

The win means Huddersfield move up to sixth, while Barnsley are one place above the relegation zone.

Barnsley, looking to end a run of successive defeats, started brightly and had the first chance of the game after 15 minutes when Harewood headed just wide.

But despite enjoying plenty of possession, the home side found themselves behind nine minutes before the break.

Church, who joined Huddersfield on loan from Reading on Friday, delivered a pin-point cross into the area for Beckford, who directed a header into the top corner from six yards.

Barnsley almost offered an immediate response as Tomasz Cywka shot just over the crossbar, before Stephen Dawson's effort from distance was saved by Alex Smithies.

Both sides had chances after the break, with Keith Southern heading inches wide for Huddersfield, before Barnsley's Reuben Noble-Lazarus shot over the crossbar.

Harewood and then Jim O'Brien both dragged shots wide when well-placed for Barnsley during the closing stages, but Huddersfield held firm to record a fourth away win of the season.

"It's not about the performance, it's about the result.

"Again, the performance was lacking penetration and I think it's obvious to everyone why we're not winning games and we're losing games.

"I just want to focus on one thing and it's definitely the result."

"I think the keeper made some fantastic saves and at 1-0 you're always vulnerable.

"I'm delighted that we saw out in a professional manner a 1-0 victory.

"We limited Barnsley to very few opportunities which was obviously pleasing as well."