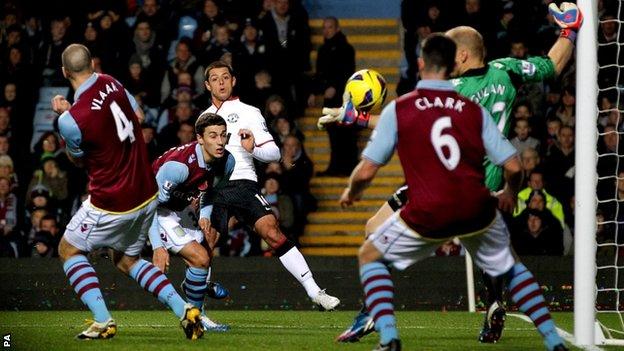 Manchester United produced a rousing second-half display to recover from two goals down and snatch a famous win from a breathless encounter at Villa Park.

The Premier League leaders found themselves 2-0 behind after 50 minutes, with Aston Villa's Andreas Weimann striking either side of half-time.

The introduction of Javier Hernandez at half-time changed everything, however.

Sandwiched by a Ron Vlaar own goal, the United striker scored twice to complete a remarkable turnaround.

Hernandez, who has now found the net seven times in his last five matches, was enveloped by his team-mates at the final whistle after United's 14th victory in their last 16 matches, a result that leaves Sir Alex Ferguson's side four points clear at the top of the table.

Incredibly, the Old Trafford club have won 15 points from losing positions this season. And yet these late United comebacks retain something of a jack-in-the-box quality. Everyone suspects they are on the cards and yet still catch their opponents by surprise. This was no exception.

At 2-0 down, United had created for themselves an utter mess. And yet somehow they rose to find hope, and with it, power and effectiveness to turn around a lost match in seven impossible minutes and finished the job with three minutes of normal time remaining.

It was tough on Villa after a brave performance but history was always on United's side. The last time United lost here in the league was August 1995. On that day Ferguson threw David Beckham, Paul Scholes, Nicky Butt and the Nevilles into the mix and Alan Hansen had warned him he wouldn't win anything with kids.

But it is Villa who are fielding the fledglings these days - seven of Lambert's side were 23 or younger, including 22-year-old Enda Stevens who made his full league debut.

United had all the experience. Scholes, who started in that United team 17 years ago, turned in another vintage midfield performance, sitting deep and spraying his trademark laser-guided passes to all corners of Villa Park. But for all of United's possession they lacked cohesion, confidence and sustained threat for 50 minutes.

Villa were two goals to the good by the time United woke from their slumber. Weimann scored both to shake United to their core.

First he found Benteke with a perfectly measured ball down the left and, when his strike partner pulled back a low cross, thumped a fizzing drive past David De Gea from 16 yards.

The interval did little to steady United as Villa began where they had left off and doubled their lead within four minutes. Ireland swept the ball left for Agbonlahor and the Villa forward's low ball skidded across the six-yard line where Weimann escaped Rio Ferdinand's attention to sidefoot in.

Villa Park was rocking and yet somehow United turned the match on its head. Ferguson's decision to replace Ashley Young with Hernandez at half-time changed the game in seven second-half minutes as United struck twice to level the match from nowhere.

Scholes, in the centre circle, set Hernandez scampering clear down the inside-right channel, the ball became caught under his feet in the box but in a flash it was out again and rolling beyond Guzan and into the back of the net.

Vlaar was producing a towering performance at the heart of the defence, throwing his body and head into the path of shots and crosses with tremendous regularity as United pushed and probed around the edge of the penalty area. But even he was powerless to prevent United's second as Hernandez fired Rafael goalwards and the volley deflected into the net off the Dutchman.

Villa were visibly shaken. Rooney's long-range shot was palmed clear by Guzan while Robin Van Persie struck the crossbar twice in one minute, first with a thumping header and then a fierce long-range shot.

Down at the other end, Barry Bannan - one of many Villa players to impress - found the head of Weimann with a curling cross from deep and the Austrian striker powered a header straight at De Gea, who turned the ball to safety with a brilliant reflex save.

But United would not be denied. Van Persie curled a free-kick towards the far post where Hernandez headed the ball into the bottom-right corner with unerring accuracy. Ferguson's clenched fist at the final whistle said it all, United had done it again.

Manchester United manager Sir Alex Ferguson: "It was a magnificent result and a magnificent game. Villa did fantastic today, they ran their socks off. We have to feel for them but we never gave in. We hit the bar twice but it was after the second goal we came alive, and it was a fantastic game. I admire the tenacity of the performance, though. When they need to do it, they do it."

Villa manager Paul Lambert: "We gave it absolutely everything, we were brilliant. I can't fault the team. We've got lots of young lads in the team and they were great. I can't ask for any more from them.