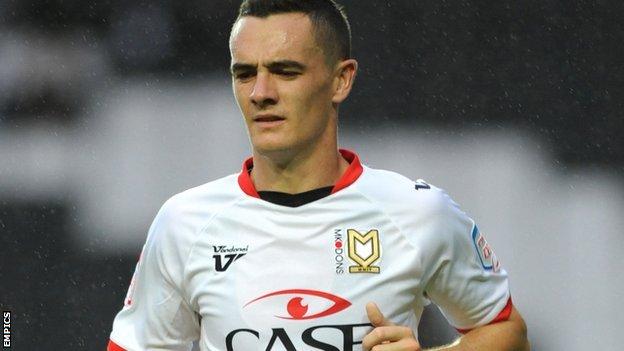 Shaun Williams scored a last-minute penalty for MK Dons to end Sheffield United's unbeaten start to the League One season.

In an even first half, Nick Blackman tested Dons keeper David Martin and Ryan Lowe should have done better for the hosts from Angelo Balanta's cross.

Williams scored the winner from the spot after David McAllister brought Dean Bowditch down in the area.

Sheffield United, who are second in League One, have won eight and drawn eight of their opening 16 games before Saturday's defeat, but have only scored 19 goals.

The Blades remain second in the table but now trail Tranmere by five points, while the Dons are seventh and outside of the play-offs on goal difference only.

"I'm livid with the penalty, it's an absolutely disgraceful decision and the referee has got it totally wrong.

"The MK Dons fans had a pop at him at the end of the first half for not giving a penalty and it was a penalty and I admit that but that doesn't make any difference.

"His performance in the second half was very, very poor.

"We have to live by it but we deserved at least a draw."