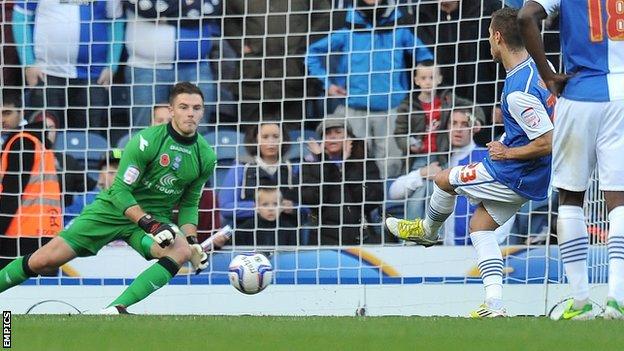 Blackburn boss Henning Berg is still waiting for his first win in charge of the club after his side were held to a draw by Birmingham at Ewood Park.

Ruben Rochina put Rovers ahead from the penalty spot after a David Murphy foul on Mauro Formica.

Marlon King quickly equalised with a tap-in after fellow striker Nikola Zigic's shot came back off the post.

Both sides missed chances to win the the game, with Jordan Rhodes having an effort cleared off the line.

The match finished in frantic fashion but Rovers manager Berg was left to reflect on achieving just two points from his three games since taking charge.

His side were rewarded for their bright start when Rochina sent keeper Jack Butland the wrong way from the spot, only for King to level almost immediately.

The goal lifted Birmingham and Ravel Morrison forced a save out of keeper Paul Robinson before King fired another Blues chance wide.

Both teams had goals ruled out for offside and Markus Olsson also sent an effort wide when well placed.

Birmingham defender Paul Robinson cleared a Rhodes header off the visiting side's goal-line in what was was proving an enthralling game.

Rovers centre-back Scott Dann came close to a winner against his former club but the match ended with both sides having to settle for a point.

"I was really happy with the welcome and as soon as the game starts you focus on the game but you can hear the fans.

"It's good to hear them get behind the team and that is encouraging for the team, that is what we need and it is a shame we couldn't give them the result they would have liked.

"I thought we deserved to win. We were at times excellent, at times OK, at times could be better but we are looking to extend those good periods even longer. But at our best we caused them lots of problems."

"We started the first half quite average and I'm glad the penalty happened when it did because give us a bit of a wake-up call.

"We showed great character when it's easy to buckle and finished the first half on the front foot and maybe could have gone in at half-time in front, and we started the second half well.

"We defended well as a group and towards the end we had some good situations where we could have nicked it."