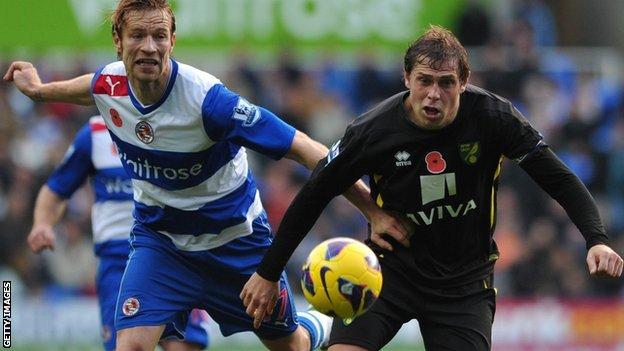 Reading continued to be frustrated in search of their first Premier League win of the season as they were held to a draw by a stubborn Norwich.

Garath McCleary had a well-struck shot saved by Canaries' keeper John Ruddy in a first half short of chances.

The home side upped the pace after the break and Sean Morrison headed wide before Jobi McAnuff shot over the top.

A Jimmy Kebe cross hit the Norwich crossbar while, at the other end, an unmarked Grant Holt nodded wide.

Reading have now drawn six of their 10 top-flight games this season and, while they have struggled to hold onto leads, they did not even have the chance to do so in a game in which both chances and quality were at a premium.

Norwich have improved defensively recently and their first clean sheet away from home in 39 Premier League games dating back to October 2004 helped them to an eighth point out of a maximum of 12.

The Canaries have also not conceded in three of their last four games and it was their durability which again came to the fore at the Madejski stadium.

The game quickly assumed the pattern of Reading being comfortably held at bay as they pressed for an opener, while the visitors tried to catch out their hosts on the counter attack.

"There is no doubting Reading's effort and endeavour but they missed the quality to break down Norwich. This is a result which will suit Norwich rather than Reading. The Royals have now gone 10 games without a win since the start of the Premier League season and only three clubs have managed that in the past and avoided relegation."

McCleary's powerful long-range shot was fended away by keeper Ruddy but, along with Royals counterpart Adam Federici, he had little to do.

The match stuttered along with headers from Reading defender Kaspars Gorkss and Norwich midfielder Robert Snodgrass going high and wide.

Canaries centre-back Sebastien Bassong was caught in possession, resulting in a Jason Roberts cross being put into the side-netting by visiting defender Michael Turner.

Reading boss Brian McDermott sent on striker Pavel Pogrebnyak and winger Kebe in the hope of kick-starting his side into some sort of attacking threat.

The move had a slight impact and Reading went close when centre-back Sean Morrison headed a free-kick narrowly wide.

McAnuff cut inside and fired over the Norwich goal, before Kebe's right-wing cross bounced off the top of the crossbar.

There was a lack of goal threat from both teams but when the opportunities did arrive they also failed to show the finishing touch to take them.

Canaries' striker Holt had two openings as Reading attacked and left themselves open but the Norwich striker headed both off target.

"We could have nicked it. I thought in the first half both teams looked nervous.

"I made a couple of changes to try to win the game [but] it is a clean sheet and gives us a good platform to try to build on. We didn't create enough chances for our strikers.

"We need to dig in at times like this and we will just try to catch the team in front of us and then the one in ahead of them."

"A point away from home to whoever in the Premier League is a decent result. In the end, the way the game opened up I thought it was us that would get the three points.

"We had to defend very well and we did excellently in that department.

"All in all, I think a draw is a fair result. It's about the other end now and, perhaps, taking the opportunities we have."