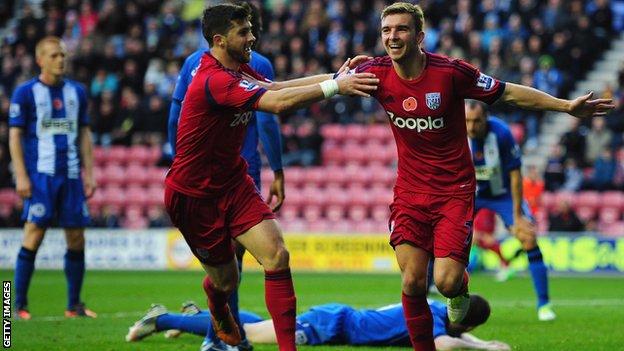 West Brom maintained their excellent start under manager Steve Clarke with a deserved win at Wigan, keeping them fifth in the Premier League.

James Morrison headed the Baggies ahead from Chris Brunt's cross before Gary Caldwell deflected Billy Jones' effort into his own net.

But the Baggies deserved the points, Ali Al Habsi only denying Romelu Lukaku a third goal with a stunning save.

This was West Brom's first away win under Clarke.

But on this evidence, former Baggies manager Roberto Di Matteo could be in for an uncomfortable return when his Chelsea side visit The Hawthorns next Saturday.

West Brom are flourishing under Clarke, whose bold tactical switches are paying off.

Peter Odemwingie scored both goals in his side's 2-0 win over Southampton at the start of the week, yet the Nigerian international found himself on the bench at the DW Stadium as Clarke switched to a 4-4-2 formation.

Despite Odemwingie's omission, West Brom raced into a 2-0 lead as the Latics failed to carry on from where they left off at White Hart Lane seven days earlier.

"The fourth official indicated five minutes of stoppage time but I don't think Wigan, who started brightly before fading, would have equalised had double that amount of time been shown. West Brom were good value for their first away win under Steve Clarke, who has got them well organised and hard to beat."

Having frustrated Tottenham with a strong defensive performance during a 1-0 win in north London, Wigan conceded two sloppy goals in the space of 12 first-half minutes.

They fell behind against the run of play when the unmarked Morrison powered home Brunt's excellent 31st-minute cross from six yards out.

The hosts then allowed Billy Jones to burst into the penalty area and the defender's shot took a heavy deflection off Gary Caldwell into the net two minutes before half-time.

Kone did pull a goal back for Wigan a minute before half-time, Jean Beausejour's impressive low cross finding the Ivory Coast striker unmarked inside the six-yard area.

But the hosts, who started brightly and faded badly, failed to test Boaz Myhill enough in what was the Wales keeper's first competitive outing since conceding six against Serbia in a World Cup qualifier in September.

Indeed it was his opposite number Al Habsi who was the busier of the two keepers, the Oman international producing a terrific stop to tip Lukaku's attempt from 12 yards over the bar in the second half.

"I don't think we are the sort of side that can get a result out of a scrappy performance.

"We know West Brom are a very strong unit and play with real confidence and are a difficult unit to break down, so to concede two goals early on was really disappointing.

"We are frustrated with our performance."

West Brom required five hours and 25 minutes to score their first three away goals in the Premier League this season. At Wigan, they found the net twice in 12 first-half minutes.

"This week we're happy with where we are. I know it sounds boring, but we just have to keep working from game to game.

"I remember once as a player I was top of the league in November and ended up fighting relegation. The top division in England can come back quickly to bite you if you take your focus off it.